The Heroine with my Face. Part 1. 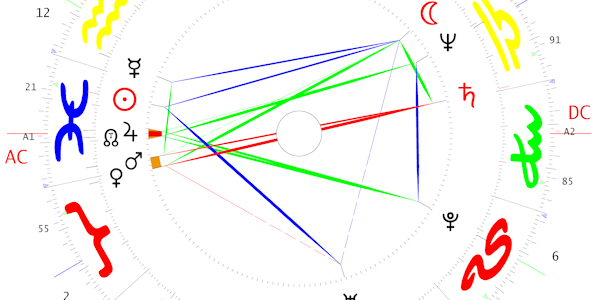 Wanda Smit reflects on the strong Jupiter on the ascendant of her chart, and relates her life experiences to this, particularly through the age point aspects. This first part covers the period from birth round to the descendant and opposition to Jupiter.

Jupiter on the Ascendant in my chart asserted its energy to such a degree in my life that I visited – or lived in – 24 different countries. Jupiter’s strong energy in me also explains why I never had a husband or children, a choice supported by Uranus in the 4th house of home and family. What I wanted was the freedom to wander and wonder. (Just living up to my name!)

The Call to Adventure

For me the Call to Adventure, the beginning of the hero’s journey according to Joseph Campbell (see my previous article on the blog), came at Xmas 1956 – a month after my Age  Point had made me aware of travel and adventure as suggested by the semi-sextile it formed with Jupiter – in the form of a 26-inch dark green bicycle! It was given to me by my parents so that I could ride to school which would start the next year. Now I could explore the ‘world’ in the village where I grew up, visit my friends and enjoy Jupiter’s sense of adventure.

We left the village – and my father – two years later. The Initiation of the Hero, the next step in this heroine’s journey, came in the guise of an Italian stepfather who introduced me to a foreign language and culture.

In December 1962, during the AP/Jupiter sextile, he took us to Mozambique, then a Portuguese colony, where I discovered yet another language, culture and music: Brazilian jazz which I enjoy to this day and which, years later, would take me to Rio de Janeiro where I stood in awe on the Corcovado mountain, looking at the earthly splendour of the bay below. (Rio is the city that best represents to me the element of earth, and with it, all those pleasures of the senses: vistas, tastes, music and dancing, etc.)

This would result in my high-school and university studies of European languages. When I was 14, my stepfather took us to Spain – on the way to Italy – and I first heard about Don Quixote by Cervantes – and went to a real bullfight. Because of Italian, I could understand some Spanish, so a trip to Buenos Aires in Argentina would take place 30 years later.

Then at the beginning of 1968 when Jupiter was fired up by the AP square.  my first boyfriend, a Swiss gentleman, introduced me to the philosopher Arthur Schopenhauer and, with it, to German thought and philosophy which would result, half a century later, in my article on Nietzsche.

After I had completed my BA, I went to the School of Interpreters in Zurich for two years. Then I returned to South Africa and continued my university studies which ended with an MA.

The left-brain world of academia didn’t suit my right-brain mind, what with four planets including the North Node either in the 12th house or in Pisces. I then became a copywriter in advertising which paid well enough for me to soon freelance and continue my travels.

In 1974, Jupiter was put into top gear by the AP square which took me to Durban on the East coast of South Africa for Xmas where I explored the sea world which, as a Pisces with far too much water in her temperament, had me in my element. Three decades later, I would be in Malaysia which reminded me of this part of my country with its rolling green hills and many Indian people.

With Mercury and the Sun in the hidden world of the 12th house, I found the thinking in advertising too superficial after a few years, and in 1985 returned to university. Again the course of Comparative Literature was too left brain for me. It seems I wanted a transformed Great Teacher as suggested by my Age Point halfway between Pluto and Saturn in the same year. However, the Semiotics course (the science of signs and symbols) led to my reading Jung’s Man and His Symbols which would take me on a magnificent journey which culminated in my articles on Carl Jung and James Hillman.

Halfway through 1986, a lecture I attended led to my discovery of the story of Sarah Baartman, the Khoi woman – The Hottentot Venus – who was taken to London to be exhibited at Piccadilly freak shows due to her enormous buttocks, and then to Paris where,  after her early death, her body was dissected by the leading anthropologist, Baron Georges Cuvier.

This was the greatest creative and mind adventure Jupiter took me on and would result in my writing five different versions – a film script (called Bête Noire), a novel, a one-act play, a radio drama, etc. The next year, I went to London (The British Library, followed by a drive south to Land’s End) and Paris (The Museum of Man) to do my initial research. This introduced me to the foreign worlds of freak shows, Khoi mythology – which led to my studies in the early 90s of comparative religion – and 19th-Century anthropology.

How was I going to put this adventure into words, into an expression of my creativity? Jupiter is after all in Pisces in my chart. My Age Point opposed Jupiter at the end of 1986 as reflected in this entry in my diary:

Today I fear that this task is too big for me. I fear I shall never be able to translate the vision I have of Bête Noire into a book or film or play. I fear the writing itself.

It has become clear to me that I favour the novel/interior monologue because it has become an act of self expression. More than anything else, I need to express my self. A lifetime of feeling and thought processes and, perhaps, insights, demands to be known. By who? By others, or by me?

Bête Noire will, it seems have to carry the burden of my projections as well. Poor woman!

As my Age Point wandered through the bottom hemisphere of the chart, there is no doubt in my mind that my heroic journey was inspired by Jupiter. And as Jupiter is accompanied by the North Node, it seems I have, according to Campbell, “followed my bliss.”

Indeed, I would not, could not, have lived differently.