Gifts for Mankind: The Picaresque Bible from Cervantes. 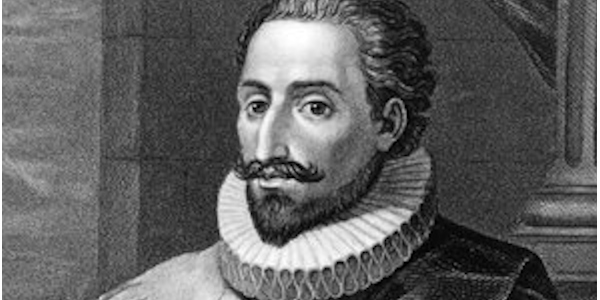 Published over 400 years ago, Don Quixote – a satire of the romance of chivalry – has been translated into over 140 languages and dialects, making it the most-translated book in the world after the bible. Its writer, Miguel de Cervantes, is widely regarded as the greatest writer in the Spanish language who gave human consciousness a new concept – ‘quixotic’, meaning ‘extravagantly romantic and chivalrous in ideals.’ Cervantes is also regarded by the Spanish as ‘The Prince of Wits.’ His novel would inspire, over the centuries, dramas, films, opera, music and art.

There is no birth time for Cervantes, born 29 Sept 1547 in Alcala de Henares, Spain. The chart has thus been set at midday (12 pm).

As can be expected of the consciousness of Cervantes, his chart shows several unusual Aspect Figures such as the Bathtub and the Oscillo. This article looks at the opposition and the two Projection Figures encompassing his core.

The opposition running through his Self is between Mercury and Neptune, as if they were locked in an endless duel. His writing, as represented by Mercury, was constantly opposed by his creative energy, by Neptune. Although Don Quixote is full of facts, these facts are seen in an imaginative light. Best known, of course, is the scene of the knight-errant charging a windmill which he sees as the enemy.

This novel abounds with such real events viewed as something else, so that reality takes on the illusory quality of Neptune, as if it were dissolving the real into the unreal. An excellent example in the novel is the wildly running flock of sheep, kicking up clouds of dust and sounding like horses hooves, which immediately has the intrepid knight attacking the ‘enemy.’ What were the planets at the operating side – the projector – projecting onto the outer or inner world, in the world up or down there? As there is no birth time for Cervantes, the structures could lie anywhere.

Neptune is the planet that plays the major role in Cervantes’s consciousness. It is the most aspected planet in his chart, in a give-and-take situation with Jupiter, Saturn, the Moon and the Sun with Mars at its side. All these planets feel the opposition of Mercury via Neptune which also features in both Projection Figures.

The first Projection Figure has the Sun conjunct Mars as its operator, showing us a movie made by Neptune and Jupiter of creative adventures and adventurous creativity, giving credence to: He who walks much and reads much, knows much and sees much.

Cervantes’s father was a barber-surgeon who set bones, performed blood-lettings and attended to minor medical needs. (At that time, it was common for barbers to do surgery as well.) It must have been Cervantes’s first experiences of fear and wonder.

Where Jupiter gets the bigger picture after endless travels, physically and mentally, Neptune adds the illusory, making it questionable: is it what I see or not? Is it real or unreal?

Already before Cervantes, the rogue, vagabond and knight-errant were favourite characters in European literature with examples in both French and German, but where these are novellas, Don Quixote is a tome of adventures and misadventures.

In the second Projection Figure, Neptune is showing Cervantes another film, this time of his masculine mind (Mars/the Sun) and his heart, his emotional ego as represented by the Moon. There is no doubt that both his mind and the man in him were touched by the Moon so that he could indulge his childlike playfulness. The Moon walks hand-in-hand with the North Node, suggesting he was on the right path for his soul’s adventure in this lifetime.

Both these Projection Figures, being only green and blue, are activated by the Jupiter/Moon square, as if these two planets are the two points on the electric plug of the projector, setting it into operation.

Little is known of Cervantes’s early years. It seems he spent much of his childhood moving from town to town with his poor family, eventually going to a Jesuit school for boys in Madrid. Wandering – Jupiter – would become second nature to him, second only to his creative urge – Neptune. In his early twenties, six of his poems were published. His master spoke affectionately of Cervantes as his ‘dear and beloved disciple’, from which we can gather he was a bright young man.

It is no surprise that Cervantes’s life was packed with as many adventures, and misadventures, as that of Don Quixote himself. At age 22 in 1569, while his Age Point was moving through the 4th house of home and family, Cervantes went to Rome in exile. (Why, we don’t know.) There he worked as chamber assistant to a cardinal. In his free time, he focused on Renaissance art, architecture, and poetry which was his introduction to Italian literature.

In September 1571, when his Age Point was moving through the 5th house, Cervantes couldn’t make an impression on the social scene as he was on a Neapolitan galley that set out to defeat the Ottoman fleet in the Battle of Lepanto. Though stricken with fever, Cervantes insisted on taking part in the battle, which resulted in three gunshot wounds, one of which rendered his left arm useless. But he was right-handed and could still write. Years later he would say he “…had lost the movement of the left hand for the glory of the right.”

In the introduction to part two of Don Quixote, he defends himself against a critic who called him ‘old and one handed’: “…as if it had been in my power to keep time from passing over me, or as if the loss of my hand had been brought about in some tavern, and not on the grandest occasion the past or present has seen, or the future can hope to see. If my wounds have no beauty to the beholder’s eye, they are, at least, honourable in the estimation of those who know where they were received…” Clearly he felt he had made an impression on the battle front.

Just like Don Quixote, he didn’t stop fighting battles. Once his wounds had healed he continued his soldier’s life in Naples from 1572 to 1575. He participated in expeditions, saw the fall of Tunis  to the Turks  and set sail for Barcelona, but the ship was attacked by Ottoman pirates and he was taken to Algiers where he was kept in captivity, working as a slave from 1575 and 1580. He started writing Don Quixote while imprisoned. Of course, this traumatic period of misadventures supplied subject matter for several of his literary works, making Jupiter proud of his disciple’s first-hand experiences. Then his poor parents, aided by Trinitarians, a Catholic religious order, paid the heavy ransom to get their son back with them in Madrid.

In 1585, after his Age Point had traversed the 6th house of work, Cervantes, now a free man, published a pastoral novel. But like most authors at the time, he was unable to make a living with his writing. He did however receive a pension which enabled him to write full-time during his final years.

When, in 1548, his Age Point was in the 7th house of close, personal relationships, he married the much younger Catalina, whose uncle is said to have inspired the character of Don Quixote.

By the time his Age Point was in the 8th house, Cervantes was working as a tax collector for the government, ensuring that all dues were paid. Not that he was honest about his own dues as discrepancies in his tax collections led, three years later, to another jail sentence in 1595.

sooner was he a free man again, than he got Jupiter’s bigger picture of life while his Age Point was wandering through the 9th house. In 1605 the first part of Don Quixote was published in Madrid. It became an immediate success making him stand out from the crowd, as tall as Don Quixote on the left and the statue on the right in Lepanto, honouring Cervantes.

He would remain in Madrid where he lived and worked until his death. During the last nine years of his life, Cervantes solidified his reputation as a writer, writing dramas, farces and other novels, but Don Quixote would remain his greatest achievement.

His Age Point was in the 11th house and where he couldn’t be part of the Spanish literary set of the 5th house, because he was engaged in battles, he could now enjoy the company of like-minded people. He finished the second part of Don Quixote in 1613, just three years before he died of type II diabetes.