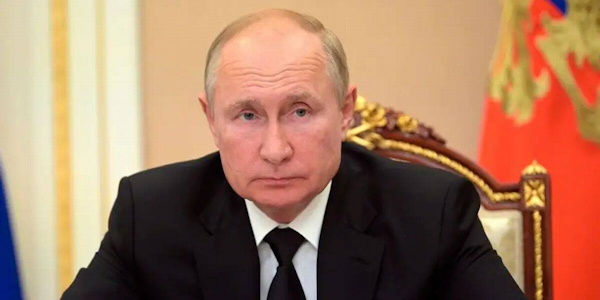 This interpretation of Putin’s chart was written by fellow astrologer David Kerr in 2014. I am including it here, with David as guest author, in view of the current situation between Russia and Ukraine and the threat of Russia’s imminent invasion of Ukraine. David focuses on the Double Ambivalence figure in the chart; then I focus on the Trapeze.David writes: The eye is immediately drawn to the stellium in the 12th house and the aspects which emanate from it are reminiscent of the levers in an old-fashioned railway signal box, quite appropriate for someone who can be quite truly said to have his hands on the levers of power. The aspect pattern consists largely of fixed figures, a Trapeze and a Double Ambivalence figure. This suggests someone who is able to operate on a large stage, can learn much from a wide variety of experiences, but in spite of that is fairly inflexible. We can see that from his handling of the Chechnya situation, the lessons of history from Stalin right back to Tsar Nicholas 1 have not deviated Putin from his implacable efforts to impose Russian control. 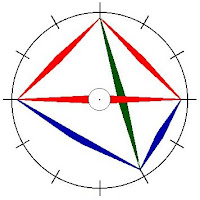 As befits a former KGB official, Putin is secretive and keeps his cards close to his chest, as shown by the 12th house planets including Mercury. On the other hand, Jupiter in the 7th allows him to present a more affable face to the world. These planets form the poles of the Double Ambivalence figure. This ambivalence is reflected by political commentators who cannot make up their minds whether Putin is a neo-stalinist or a closet reformer. The open and outgoing Jupiter is ultimately controlled from the conservative and secretive blue corner by Sun and Saturn so there is likely to be something in the closet. The enigma is compounded by having an unaspected Moon. Emotion does not obviously figure in Putin’s makeup and it this adds to his inscrutability.

On the 8th of July Putin’s age point will enter Leo. [Editorial comment: This was so at the time of writing; Putin’s Age Point is now in Libra and in the 12th house,where the stellium of planets is. His Age Point has recently been past the 12th house Low Point and he will be 70 in October]. When the age point enters a sign it activates any planets in that sign, regardless of which house they are in. In this case [when David wrote this in 2014] it is Pluto. Pluto is a transpersonal, spiritual, planet, but when it is on an angle as it is here it can be used, or abused, in the outside world.

Putin’s Pluto is conjunct South Node, so there might be an atavistic tendency to exercise power in a Stalinist fashion. On the other hand, South Node is conjunct the IC, firmly in the collective zone, the people of Russia, and the controlling 12th house planets are in Libra, the sign of justice. Putin describes himself as a true servant of Russia so perhaps the evidence of the chart shows the sincerity of his goals, whatever methods he may employ to reach them.

Joyce offers an extract from Aspect Patterns in Colour: (published 2010):

Vladimir Putin, President of Russia, has a Trapeze in his chart. Its pinning planets in the 12th house stellium (Sun, Mercury, Saturn, Neptune) are shared with two other aspect figures. However, the Trapeze dominates and its internal thinking and learning processes will feed into the Double Ambivalence figure and the all-blue Small Talent triangle (which is not discussed in this post).

Strong multiple aspects from the stellium radiate out to the other pinning planets – red squares to Uranus, green quincunxes to Jupiter and blue trines to the Moon’s Node. But it is the stellium that holds the eye and indicates a formidable driving force of his will (Sun), his need for firm structure (Saturn), his ability to communicate (Mercury) and his ideals (Neptune) which drive this Trapeze along. Putin has headed the direction and mindset of Russia in the 21st century. He is credited with bringing political stability and re-establishing the rule of law, yet corruption is also said to have increased.

Bruno and Louise Huber describe someone with a Trapeze as having “a larger-than-life personality”. On the one hand, we have the outgoing Putin engaging with world leaders using Jupiter in 7th linked to Mercury, Saturn and Neptune. On the other hand there is the more inscrutable Putin with his strong-by-sign Sun dominating from the 12th, a master mind who controls and manipulates, pulling the strings like an arch puppeteer.