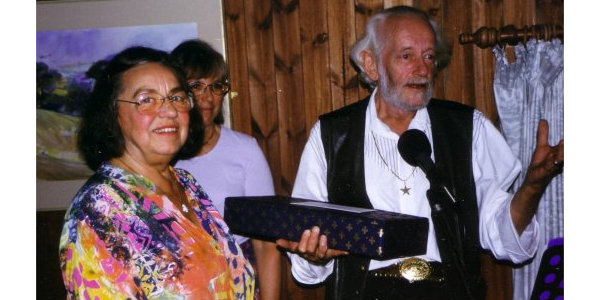 While I was a Foundation Course student in the mid-late 1990s, I attended several seminars held by Bruno & Louise Huber, in England, Spain and Switzerland, culminating in the Seven Rays seminar of 1998. It was here that I became aware of the full depth of the Hubers’ understanding of psychology and spirituality, and it reinforced my appreciation of the well-founded nature of their approach to astrology. Bruno seemed to me to be such a wise and deep thinking human being. This was the last time I met Bruno, who died the next year. At one point he said to me ‘I feel as if I’d known you before’, which was strange because it mirrored a similar feeling I’d had about Bruno. Subsequent events suggest there was at least some sort of synchronistic connection between us.

Anyway, fast forward to 2003, when Louise and Michael Huber gave a seminar at Buckland Hall in Wales and I was one of the cohort to be awarded the last Swiss API Diplomas in England. It had become apparent that the Hubers’ English publisher Samuel Weiser was running down publication of their books in English. This meant that students of the English School might not be able to obtain copies of books that were by now Set Books for the courses. Also, there was no English-language publisher for the Hubers’ latest books Aspect Pattern Astrology and The Planets. At that time Joyce and I were investigating publishing an introductory book for astrological psychology, The Cosmic Egg Timer. The new technology of ‘print on demand’ was just becoming a viable and economic proposition, and I was recently retired and had the time to pursue it, so we suggested to Louise that we might publish some of their books in English through our emerging publishing vehicle HopeWell, including collaborating on the translation of Aspect Pattern Astrology. It was a pleasure arranging this with Louise. Over the years HopeWell has evolved into a successful publishing venture, with now 18 titles and 6 ebooks currently available.

Coming now to early 2020, Joyce and I had just dashed back from staying with family in the USA due to the covid-19 outbreak, and soon found ourselves in quarantine, then lockdown. For a long time I’d had a secret urge to create a biography of the Hubers, but had always baulked at the scale of the task. This forced confinement seemed like an ideal opportunity – it was now or never. So Joyce and I buckled down, and reviewed possible sources of information, particularly the rich resources of back issues of the magazines Conjunction (English) and Astrolog (German). We also contacted possible contributors, and inputs came from UK, Spain, France, Germany, Switzerland, USA, Argentina and Chile. Soon the shape of a book emerged, as did invaluable help from fellow API diplomate Sue Lewis, who reviewed drafts, translated material from Spanish, and suggested significant improvements. Now, eight months later, we are ready to publish, the date is set for 10th November.

The book tells the story of the development of Bruno & Louise’s ideas, their formative influences and what impelled them to do what they did, and how they inspired others along the way. It tells of how they established a professional institution, the Astrologish-Psychologisches Institut (API) in Switzerland, and the series of World Astrology Congresses, and how their teachings spread worldwide, notably through the establishment of the English and Spanish Huber Schools. It also tells how the enterprise faltered and growth slowed after Bruno Huber’s heart attack in 1991, but also how the indomitable will of Louise, supported by Michael Huber and the API teachers, kept things going even after Bruno died in 1999, into the 21st century. It tells of the demise of the API institution, but the continuation of the teaching through separate schools in the German-speaking area, and the continuing availability of books and websites supported by teachers in English- and Spanish- speaking parts of the world. This is the story of Bruno & Louise Huber and their Huber Method of astrological psychology.

Having done all this, it is evident to me that the Hubers’ ideas will be around for a long time. Their story is an inspiring example of just what two dedicated people with the right motivation can achieve. We hope that this book will play a part in inspiring new generations to take up this fascinating and rewarding  process of understanding themselves and growing towards their true spiritual potential. You, the reader of this post, can play your own part in seeding these ideas. We hope this book will give you a tool to help.

Details of the new book will appear on this website soon.