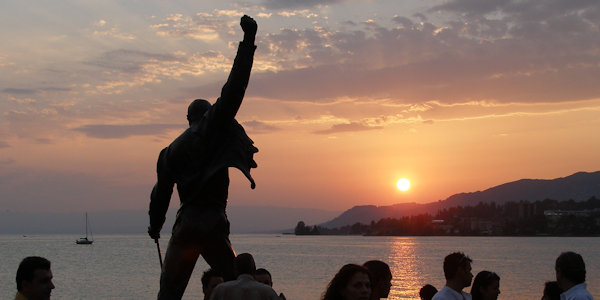 Freddie Mercury tops of my list of rock singers. His voice is iconic, along with his style and energy in performance. He was electric and riveting on stage but, according to the current biopic of his his life with Queen, was not an easy person to live with. Nor was he comfortable with himself and his bisexuality until much later in his life. Watching the recently released film, Bohemian Rhapsody, about his life and the story of Queen’s global success has sent me back to look at his chart, which I first wrote about in 2010.

Freddie was born on 5.9.1946 on the island of Zanzibar, off the coast of Tanzania. His birth time is speculative, but is given as 05.10 in “British Entertainers – the astrological profiles” by Frank C. Clifford. Using the Huber Method of Age Progression I’ve checked out a few key life events, and find there is some validity in this time, so that’s what Freddie’s chart is set up for.

It shows predominantly linear aspects, with only one complete aspect pattern – the red/blue Ambivalence triangle. This suggests an inner drive and motivation that was overwhelmingly restless and adaptable. Freddie’s family fled Zanzibar when he was 17 to avoid the dangers of the Zanzibar revolution in 1964, and they settled in the UK. This event concurs with his Age Point making a quincunx aspect to Uranus when he was 17, Uranus indicating the sudden change and upheaval created by a revolution, and the move to somewhere foreign and completely different.

Yet Uranus in the 10th house in Freddie’s chart signifies much more than that. He was different, exotic, dressed like a peacock, strutted with attitude, broke boundaries, wrote poetry, demanded and commanded notice and recognition. With the north node conjunct Uranus, this suggests he was prepared to go into the uncharted waters of life rather than fall into the familiarity of the south node conjunct his Moon in the 5th house when performing. He was willing to stretch and break boundaries. This was was a key factor in his personal life as well as a musician and song writer. It’s worth noting that Uranus is stressed before the 11th cusp, so maybe there was a constant urge and itch to step away from any “standard” expectations of the 10th house, and seek more diverse and unconventional contacts, friendships and expression in the 11th.

The other members of Queen – Brian May, Roger Taylor and John Deacon – are portrayed in the film as stalwart friends and Freddie’s chosen family. They squabbled and fell out like a close knit family, but this was one of the strengths which held them together. Brian May and Roger Taylor were creative and music consultants for the film, and research on the web reveals that it took 10 years of discussion and search for the right actor to play Freddie, and for the Bohemian Rhapsody movie to be made.

Freddie’s contribution to British music is outstanding. He joined Queen in 1970, as his Age Point reached the 5th cusp and was conjunct the Moon. He was reputed to be a very private person, which is perhaps indicated in his strongly “I” sided chart with Sun in Virgo; it’s only his Moon in Sagittarius which is up for grabs, just into the “You” side of the chart and more visible to the world. With Moon opposite Uranus, the highest planet in the chart, this combination allowed him to perform in his often outrageous, creative and very individualistic style, which had such great appeal to his audiences. He encouraged them to join him in chanting, clapping and singing. How very Moon in Sagittarius, conjunct south node in 5th is that?!

Musing on his 1st house Virgo Sun, which is quite weakly aspected, I’m drawn to speculate on its semi-sextile to Pluto and square to the north node. The message I get here is “If you’re going to do something different and change or transform yourself and the way you perform, then get it right!” The perfectionist Virgo can well be imagined here!

The Ambivalence triangle is quite a common aspect pattern in charts. The person feels the tension of work in the red opposition aspect, but they can escape into the planets at the blue corner of this pattern for R&R. With Venus and Jupiter here, Freddie’s exuberant lifestyle and exploration of his sexuality seem to fit. The real long term love of his life, Mary, was a constant but being together eluded them both as they followed different relationship paths. Freddie’s was ultimately more risky as he contracted the AIDs virus, which killed him.

Freddie’s Age Point made another quincunx to Uranus in 1975 which coincided with the release of the single, “Bohemian Rhapsody”. Groundbreaking and innovative, with operatic sections, Freddie wrote it, directing his fellow band members in its performance. His imagination, creativity and wide appeal may well be due to his unaspected Balance Point Neptune; was he able to tap into something less tangible for his inspiration? Was this where his – at times almost heavenly – voice came from? And here I think of him singing “Barcelona” along with Spanish opera singer Montserrat Caballe, who said of him “the difference between Freddie and almost all the other rock stars was that he was selling the voice”.

Freddie died of pneumonia, associated with the AIDs he had, at the age of 45 on 24th November 1991. 27 years ago the world lost a charismatic performer, a creative writer, a performer and a voice which as yet, is unsurpassed.

It’s touching and sometimes bitter-sweet to hear his voice, but oh how fortunate we are to have had experienced such talent. And what a musical legacy the world has inherited. Freddie – you’re not forgotten.

Featured image shows statue of Freddie Mercury at Montreux, and above picture is from a concert in New Haven 1978, both via Wikimedia Commons.