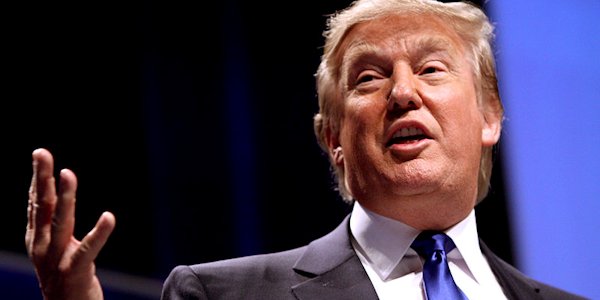 Joyce examines the chart of the controversial Donald Trump, and notes its significant ‘Megaphone’ aspect figure.

If you’ll pardon the pun, this man has been trumpeting forth on a variety of controversial subjects for the past few months as he ramps up his bid to be nominated as the Republican Party candidate to become the next President of the United States.

Much as I dislike the views and opinions of this man, I’m intrigued to see if, and how, his mind set and attitudes might show up in his chart.

The overall chart image brings to mind two overlapping images: a well-aimed dart, maybe a paper plane, with the Moon at it’s sharp end, the apex. But look again – the dart, the blue/green quadrilateral ‘Megaphone’ figure, is overlaid by a louder, heavier triangular ‘Ambivalence’ figure, which is reminiscent of a paper “thunderclap” toy, which when held in the hand and thrust through the air like a sword, emits a loud bang. I’m already beginning to connect these initial images of sound amplification and attention-seeking to the windbag-like behaviour that Trump has been exhibiting.

There is no doubt that this man is an impressive and successful entrepreneur. The Sun/Uranus conjunction in Gemini in the 10th house of his chart speaks fathoms of his ability to communicate, think divergently, and possibly wheel and deal too. The Moon’s North Node sits in the middle of this conjunction, indicating that standing out as an individual and making his mark on the world is part of Trump’s developmental path. But wait a minute… he was born the son of a millionaire, and chose to develop his own empire of riches. What he’s possibly neglected here (as far as I know, I’m not a fan or a follower) is the South Node end of the nodal axis. His South Node offers the possibility of balancing the big 10th house “out there” stuff by making a connection with the other end of this axis, namely the 4th house and the collective. His Moon sits in this house, and by default is conjunct the South Node. He appears to be currently tapping into this collective area, but in a way which fuels the needs of his Sagittarian Moon, namely to be outrageous yet still admired at the same time.

It’s interesting to note, too, that both Sun and Moon are intercepted in their respective houses, so Trump will have to shout louder and work harder to express these aspects of his personality in more garish and noticeable ways to get them recognised and acknowledged. Which begs the next question, if we move on to consider the Family Model… how did he as a child (Moon) perceive and experience his father (Sun)? Connected as they are by the hefty oppositions on the 4/10 Individuality axis, things were probably not always smooth. With two key ego planets intercepted, Trump has to divert their expression to go via the third pinning planet in the triangular Ambivalence figure – Jupiter. In the 2nd house of the chart, where possessions are significant, Jupiter’s risk-taking and adventurous entreprenuerism seem to have been capitalised upon to help him make his millions. Yet Jupiter is also intercepted, making it more challenging for him to do this, so here I’ll cut him a bit of slack as he has successfully made a whole heap of money. It’s more than likely that this intercepted trio of planets has sought a less blocked pathway out into the environment via the Venus/Saturn conjunction in 11th, and through Mars in Leo, stressed before the AC, which could be very pushy.

And what of the Megaphone, connected as it is to Sun and Moon, both of them also pinning planets in this figure? A Megaphone in the chart is like having an amplifying mouthpiece to hand, to help express closely held ideals. Regardless of whether or not Trump’s personal ideals are liked or accepted, he’s going to use that figure to make them heard. The Huber’s described the Megaphone thus: “We speak quietly into the narrow end and our voice suddenly fills the room.”

We have a personal choice with Trump though. We don’t have to listen.