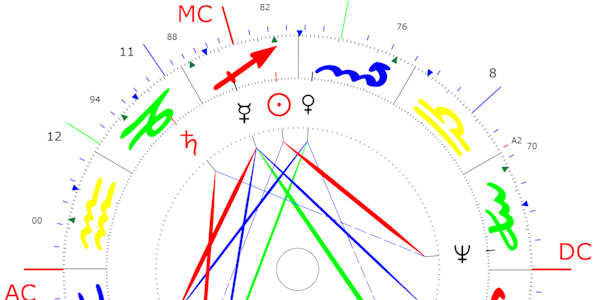 We all know that colour is an essential feature of astrological psychology, and it gives immediate meaning to the Huber-style birth chart. In the early days of the English Huber School, charts were hand-drawn with coloured pens. Then along came computers to help the process, and many charts were of necessity black-and-white. Of course, this was reflected in all the early English publications on astrological psychology, including the original APA course manuals. We were eventually able to introduce colour into the APA course manuals (around the late 1990s?), as colour inkjet technology gradually became ubiquitous and the manuals were printed as required.

When we established the publisher HopeWell in 2003, using the emerging technology of print-on-demand, the production of books with illustrations in colour was either not possible or then prohibitively expensive. To keep the price of books within reasonable bounds we had to print in black-and-white.

We started with The Cosmic Egg Timer, a basic introduction to the Huber Method, and then Aspect Pattern Astrology, which the Hubers had somehow managed to publish in colour on the continent. The economics were of course different in the German-speaking world, where there were many more individuals directly inspired by working with the Hubers. Louise Huber was very dubious when we said we would publish Aspect Pattern Astrology without colour – colour was the whole point of the approach. But it did work and we have since sold copies of this, the most popular Huber book, into four figures in the English-speaking world. The coloured bookmarks we sold alongside the books initially soon became largely defunct.

After publishing a number of further black-and-white books, I discovered in 2010 that a slim book could by then be produced including colour illustrations at a reasonable price. The result was the publication of our first colour book Joyce’s Aspect Patterns in Colour. Note that prior to this, the technique used by conventional publishers of including plates of colour illustrations in a black-and-white book is not possible with print-on-demand technology.

When our printer Lightning Source later introduced cheaper colour technology we were able, in 2013, to publish Joyce Hopewell’s book Using Age Progression in colour from the start. This was soon followed by Sue Lewis’s Astrological Psychology, Western Esotericism and the Transpersonal, by John Grove’s Life Passages, and then in 2017 Astrological Psychology: The Huber Method, based on the old Diploma Course.

More recently we have turned our attention to some of the older black-and-white editions. The third edition of The Cosmic Egg Timer was published in colour in 2018, and I am pleased to announce here that the second edition of The Living Birth Chart has just been published in colour. Now these introductory books give a much better impression of the power of the Huber Method. Here is our range of colour books so far.

For details of individual books go to the books page.

Also in the works, but not yet ready for publication, is a new colour edition of Aspect Pattern Astrology, which will finally allow this seminal work to be presented to the English-speaking world in the form it was originally intended. Louise would be delighted!

Watch this space for details of availability…

The featured image is, of course, part of Bruno Huber’s chart.