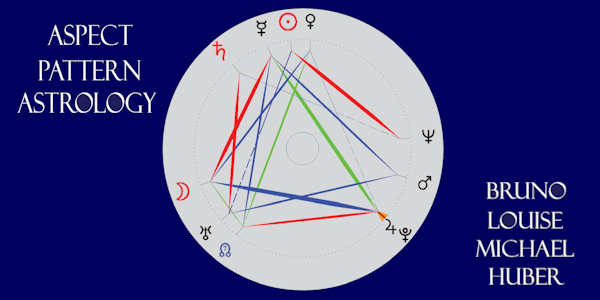 Aspect Pattern Astrology represents the culmination of Bruno & Louise Huber’s life work, in outlining for the first time to the general astrological public the crucial significance of the aspect pattern for psychological interpretation of the birth chart. The book was first published, with full colour illustrations, in German in 1999, the year that Bruno died. Indeed, I recall Bruno & Louise talking about it during the Seven Rays seminar in Devon in 1998. Their son, Michael, had assisted in producing this major opus. Interestingly, Bruno said to me at that seminar that he felt that he had known me before (we first met), and I replied that the feeling was mutual; the significance of that only became apparent to me later.

Within API(UK), which later evolved into APA, we had concerns about how to get this book translated into English, as Samuel Weiser, the Hubers’ publishers at that time, had lost interest in publishing further astrological psychology books.

Serendipitously, around that time I began the process of retirement from full time work, so had time to complete my Diploma in Astrological Psychology. I also studied a Writing course, which included all aspects of writing – non-fiction, fiction and publishing. Well, I completed the non-fiction part and got on to the publishing, at about the time Joyce and I were discussing how to satisfy the need for a simple introduction to Astrological Psychology. Talking to friend Will Parfitt, we discovered that the new technology of ‘Print on Demand’ meant that books could be produced without the major overheads of producing an initial ‘print run’ incurred with traditional printing. Thus was born the introductory The Cosmic Egg Timer – which Joyce and Richard Llewellyn wrote and I edited. I never did get around to the ‘fiction’ part of the course.

In 2003, Louise came to the UK for the last time, this time with Michael Huber. They ran a seminar at Buckland Hall in the Brecon Beacons. Here I was fortunate to receive one of the last set of API Diplomas presented by them, along with 7 others.

Despite the loss of Bruno 4 years earlier and the fact that she was then 79, Louise was still the force of nature I recalled from earlier seminars. I remember talking to Louise and Michael during one of the meals about the problem of publishing Aspect Pattern Astrology in English, and musing on whether we might publish it using ‘print on demand’, as for The Cosmic Egg Timer. The problem seemed to be one of cost, as colour printing with ‘print on demand’ was, at that time, prohibitively expensive for a book of that size. Could it be done in black-and-white, I wondered? Louise was not convinced. She regarded colour as essential to the book.

To cut a long story short, we eventually came up with a set of laminated bookmarks in colour to offset the lack of colour in the book. This satisfied Louise to the degree that she gave permission for us to translate and publish, and we fortuitously found a suitable translator, Heather Ross, via Richard and Elly’s contacts. The first edition of Aspect Pattern Astrology was thus published in 2005, subsequently becoming the best-selling English-language astrological psychology book. Eventually, the laminated bookmarks fell into disuse, and readers managed with the black-and-white version.

Fast forward to 2019. From those early beginnings, we now have 18 books published on astrological psychology, plus a number of ebooks, so it seems I was destined to be the English-language publisher for the Huber books – which seems to represent the fruition of that psychic link with Bruno.

Colour printing recently became much more affordable, so we decided to produce a new colour edition of Aspect Pattern Astrology. This second edition becomes available on 3rd June 2019 and supersedes the original, at a comparable price. As well as full colour illustrations, the text has been much improved and clarified, particularly thanks to the proof reading efforts of Sue Lewis and Joyce Hopewell.

This new edition is being made available to members at a special price in the Members’ Area of the website. Do take advantage of this to refresh that tired old black-and-white copy!

We now have Aspect Pattern Astrology (follow link for details) in the form originally intended by the Hubers. Louise would be delighted!