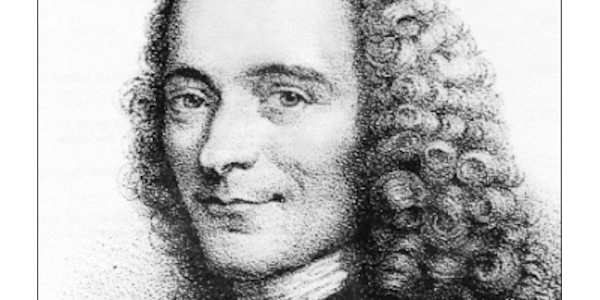 “Depth, genius imagination, taste, reason, sensibility, philosophy, elevation, originality…” These are 9 of the more than 40 words with which the German genius Goethe described Voltaire who was a witty French Enlightenment writer, historian and philosopher famous for his criticism – in the early 18th Century already – of Christianity, especially the Roman Catholic Church, and the lack of freedom of religion and freedom of speech. He dared to speak out against the lack of civil liberties, despite the immense risk this placed him in.

The chart looks like an arrow launched from the 12th house and aimed at the world out there. In Voltaire’s consciousness, Uranus in Gemini in the 12th house constantly confronted Mercury at the other side of the opposition: What underlies reason? What new ways are there to communicate? Uranus constantly challenged the Mercury in Voltaire to be more daring in his work (6th house) which resulted in 200 novels and pamphlets, the Philosophical Dictionary, numerous Histories, articles for the Encyclopaedists, countless poems and plays. He also wrote 20 000 letters to close friends and lovers. One historian called these letters “a feast not only of wit and eloquence but of warm friendship, humane feeling, and incisive thought.”

Another contribution to Voltaire’s great output was the surplus of fire in his temperament (-18). One Baron spoke of his “caustic expression, his sparkling mischievous eyes, and declares that his behaviour exhibits all the fire of his writings; that the brilliant play of his personality is dazzling in its intensity.”

It’s not surprising that there is a Megaphone in Voltaire’s chart, the only aspect structure other than 6 linears. What he ultimately became famous for was not innovative literary styles – his Neptune is in an intercepted Pisces in the 10th house – but for his brilliant wit which made him extremely popular among the nobility. He is considered the Voice of the Enlightenment and of The Age of Reason.

At the mouthpiece of the megaphone is Pluto on a 3rd house cusp: Voltaire would transform the learning and beliefs of the collective and come up with new ways of thinking. Pluto constantly challenged his bright Moon – his strongest ego planet – to throw some light on the bigger picture of the 9th house and then, via a sextile, share those insights with his Sun. And as the Moon is in Aquarius, life philosophies were indeed close to his heart.

He always kept his eye on the 6th, 7th and 8th houses as The Eye at the receiving end of the megaphone intimates. The Eye has all three ego planets at its angles, giving it a blindingly bright vision in the darkness of no reason. As a satirical polemicist, he frequently made use of his works to criticise intolerance, religious dogma and the French institutions of his day. With his Sun, Mars conjunct Mercury and North Node in the house of adventurous work, as their Sagittarian guise suggests, he would write in almost every literary form. And with Mercury so close to Mars, the man in him would be one with ever expanding knowledge.

The above-mentioned opposition on the Encounter Axis caused tension throughout his life, but he had to speak out. That he spoke out too vociferously is evident in the countless times he had to flee Paris where censorship laws were very strict at the time.

He was born in Paris to a father who was a lawyer and a mother whose family was on the lowest rung of the French nobility. He was educated by the Jesuits who taught him Latin, theology and rhetoric. Later in life he became fluent in Italian, Spanish and English. By the time he left school, he had decided he wanted to be a writer, against the wishes of his father, who wanted him to become a lawyer. This certainly exacerbated Voltaire’s revolt against unquestioned authority. At the same time, his consciousness was on the low point of the 4th house of traditions and conventions as if he found old ways of thinking depressing.

Pretending to work in Paris as an assistant to a notary, he spent much of his time writing poetry. When his father found out, he sent Voltaire to study law in Normandy, but the young man continued to write, producing essays and historical studies.

In 1713 when he was 19 and his consciousness was brimming with Jupiter’s energy as the AP/Jupiter conjunction implies, he became secretary to the French ambassador in the Netherlands. At The Hague, his adventure ended when his affair with a French Protestant refugee caused a scandal and he was forced to return to France. It was the first of his 11 clashes with the law. (One wonders what his lawyer father would have said to this daredevil of a son.) His provocative side had this scurrilous poet scurrying away in exile, locked away in prison and side-stepping attempted arrests. He also often published his unauthorised books clandestinely in other cities and then smuggled them into Paris.

One satirical verse, in which Voltaire accused the Regent of incest with his daughter, resulted in an 11-month imprisonment in a windowless cell with 10-foot-thick walls. Like his Uranus in the confinement of 12th house, he was now behind bars but didn’t stop daring his Mercury to speak out. He wrote his debut play Oedipus in prison. It was staged in November 1718 – the same month his Age Point was on the 5th-house cusp. He certainly made an impression on the social scene as the play was an immediate critical and financial success. The Regent of France and the King of England both presented Voltaire with honorary medals. It was but the beginning of Voltaire’s long life of creative self-expression which would culminate in the brilliant philosophical tale, Candide, published in 1759 when he was 65.

When his Age Point was parading through the 5th house, he wrote many more plays, most of them successful. Theatre was his favourite form of writing and he also enjoyed creating bawdy plays such as the one on Joan of Arc (La Pucelle). To make an impression on the social scene, his 5th-house Venus endowed him with sufficient grace for the nobility. He would soon up the low rank (on his mother’s side) of his nobility, especially after spending several years at the court of Louis XV in France and Frederick II in Prussia.

In early 1726, when Voltaire’s consciousness was filled with his bright Sun – as the AP/Sun conjunction suggests – Voltaire challenged a young French nobleman to a duel after the latter had hired thugs to beat him up. However, the family of this aristocrat arranged for Voltaire to be arrested and imprisoned in the Bastille without a trial. Fearing an indefinite prison sentence, Voltaire suggested that he be exiled to England as an alternative punishment, which the French authorities accepted.

While his Age Point was marching through the 6th house of work, he made many new acquaintances in England who were essential to his career: Alexander Pope, John Gay and Jonathan Swift. He also discovered the writings of Locke and Hobbes. He experienced all those planetary energies in the area of service to others – the Sun, Mars, Mercury and the North Node – to the full as his Age Point conjoined these planets. His exile in Great Britain would have a great impact on his writing. With his consciousness saturated with Mars and Mercury (1928 and 1929), he returned to France. As one critic noted, he went a poet and returned a philosopher.

Scarcely back in Paris, he won a lottery and as he was a good financial investor, his fortune would continue to grow. His fame also continued with the great success of his play Zaïre in 1732 and his many Letters concerning the English Nation published in 1733. Because he regarded Britain more developed and more respectful of human rights (particularly religious tolerance) than France, his English Letters created a scandal and the book was publicly burnt and banned. Voltaire was forced again to flee Paris, this time together with the new woman in his life, the Marquise de Chatelet.

In Voltaire’s book on Newton’s philosophy, the Marquise du Châtelet appears as his muse, reflecting Newton’s heavenly insights down to Voltaire.

No sooner was his consciousness filled with the idea of close personal relationships, than he had a 16-year relationship with this Marquise, a married mother of three and twelve years younger than he. Although only 26 at the time, she was an intellectual interested in science, making her the kind of Venus his Mars – accompanied by Mercury – could relate to as implied by the semi-sextile linking them. Together they collected 21 000 books on science, history and philosophy which they studied and discussed. Her book on Newton’s Science would lead to his book on Newton’s Philosophy.

Voltaire was deeply committed to the Marquise, but eventually found life at home with her confining. On a visit to Paris, he found a new love – his niece. After the death of the Marquise in childbirth in 1749, Voltaire and his niece lived together and remained together until his death.

His chateau in Ferney.

They first settled on a large estate in Geneva, but soon Voltaire was at loggerheads with Calvinist Genevans and he bought an even larger estate in Ferney, on the French side of the Franco-Swiss border, so he could easily escape to Switzerland, if necessary.

Early in 1759, just after the 11th house low point when Voltaire was exasperated by Leibniz‘s philosophy of optimistic determinism, he published his satirical philosophical tale, Candide, or Optimism, the work for which he is best known. He would stay in Ferney for most of the remaining 20 years of his life.

When his Age Point traversed the 1st and 2nd houses for the second time, Voltaire became a highly successful businessman, frequently entertaining distinguished guests. But during the day, he was as inaccessible as his Uranus in the 12th house indicates. After all, he had to keep on shooting those arrows.

In the last year of his life, 1778, Voltaire returned for the first time in over 25 years to Paris for the opening of his latest tragedy, Irene. He was treated like a returning hero by the audience. A few months later, he died. Because of his lifelong criticism of the Church, he was denied a Christian burial in Paris. Friends and relations managed to bury his body secretly in Champagne. Three years later, his remains would be enshrined in the Paris Panthéon with all the French Greats.

Voltaire’s tomb in the Panthéon.