The Zero Point of the Zodiac – the Pisces/Aries Border 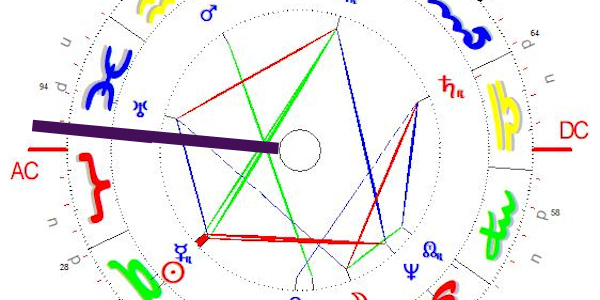 At the turning point of the year, we publish this article by Louise Huber on the ‘zero point’ of the zodiac, extracted from the book AstroLog I: Life and Meaning. It was first published in ‘Astrolog’ Issue 36, February 1987.

Many years of observation have shown that a certain place in the zodiac has something special about it – the border area between Pisces and Aries, corresponding to the AC in the house system. The zodiac starts and finishes at 0° Aries, and the AC is the start of life. Life begins in a kind of darkness. Out of the nothing a person emerges and begins their life’s journey. We could easily imagine that at the Pisces/Aries cusp, there is a seam where the two ends of the circle meet. With a little imagination, it can be seen as a gap through which life can enter and exit. The soul descends from its spiritual realm to the human realm through this gap, like a gateway to incarnation. It is the place where a new cycle of manifestation begins, and at the end it goes back through this gap to the spiritual realm. There is a mysterious contact between life and death here.

From another point of view, this zero point of the zodiac corresponds to an opening to the transcendent, a gap extending from 29° Pisces to 0° Aries. Here there is a zero sphere, a cosmic fissure, linking us to cosmic influences and transcendental worlds.

It is interesting to note that if we place a colour circle around the zodiac [see further reading below – Ed], this place corresponds to the colour purple, which has a particular affiliation with the spiritual, unrevealed world. Purple is a combination of 50% red and 50% blue. Purple is a special colour worn by high-ranking clerics, kings and emperors, those who stand above or apart from others. A king or cardinal is untouchable, removed from everyday life. He wears purple because he stands outside normal human standards.

Purple and violet (which corresponds to the 12th house) are concerned with nothingness in colour psychology; violet in paintings or pictures signifies nothingness. Something that does not exist, or is so transparent that it cannot be perceived from the earthly dimension. Purple is an unreal colour which does not produce light. Illusions are a more worldly, more understandable effect of purple. It is often found in paintings of the mentally ill, as they live in an illusory world. In terms of colour psychology, purple therefore represents an unreal mental state, indicating that the person lives with at least part of his being in a world different to this one, perhaps a fantasy world. A planet on the zero point has something of this quality; it is not completely incarnated, part is still stuck in the other side.

Sun at the Zero Point

In research studies and consultations, we have noticed that people with Sun at the zero point are often unable to react directly to the realities of life. Vital Sun energy appears not to get through, as if not completely incarnated, or as it were hanging halfway through the gap. Reactions to normal situations are often delayed or postponed; they either react rashly or at the wrong time. We know such people who often react at the wrong time and say the wrong thing, or want something at the most inconvenient moment or share personal opinions with no relevance to the actual situation. Others always arrive late and have forgotten something important. It is as if there is no close contact with reality; the consciousness seems to hover above the ground.

We know of others with Moon and Venus in this gap who have special artistic abilities. They bring something of the transcendence of other spheres into their paintings or music. One paints enchantingly tender angel figures of fascinating beauty, which are not kitsch but reveal something of the vibration of spiritual spheres.

Age Point at the Zero Point

The Age Point of many API students has already passed through the zero point. We have already received interesting reports, assembled in the book Astrology and the Spiritual Path [now Transformation: Astrology as a Spiritual Path]. We quote:

“The zodiac ends in Pisces, and begins in Aries. At this juncture, the circle is closed: alpha and omega, death and rebirth mysteriously meet. As AP enters Aries, you pass through the so-called zero point of the zodiac. Here you usually feel a strange connection with transcendental realms. Consciously or unconsciously, you will be touched by something that may appear strange and yet somehow familiar – an experience of subtle energies acting on you through this gap. Some people are strongly affected, others not at all, depending on their spiritual receptivity. Many feel troubled and do not know what is wrong, especially if they are trapped in the material world and know nothing of their self’s real home. There can be death and rebirth processes and profound transformation crises. Some feel helplessly at the mercy of some power. Others wait consciously for connection with spiritual worlds, open themselves up to subtle healing forces through prayer, meditation, spiritual withdrawal or search for mystical knowledge of God. Many whose AP has crossed this point report a pull, a longing to return to the spiritual home. This often brings an inner conversion, a change in life motivation, a decisive climacteric. In any case, a new cycle begins with the entrance into Aries, for which you should be well prepared.”

The featured image shows the zero point in Louise’s own chart. Here it is very close to the equivalent ‘zero point’ of the house system, ie the ascendant.