The Tyranny of Aesthetics 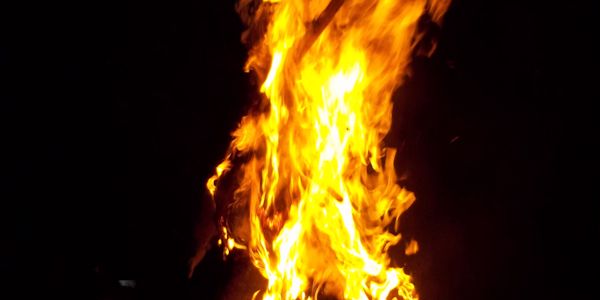 I never knew, in my twenties, why I felt compelled to move from one flat to another, seldom staying anywhere longer than six months. Six months of fixity seemed to be all I could handle. I’d paint the walls, lengthen or shorten the curtains I had used in the previous flat, adding a frill or two if I needed more feminine surroundings in my otherwise masculine world: in academia or advertising, Male Thinking Ruled. Too much air for someone who is mostly underwater.

Then in my late twenties, I bought my first house. Soon I set about filling printer’s trays with knick-knacks, painting the kitchen pine furniture a forest green, my bedroom walls rust, putting floral Sanderson wallpaper on the kitchen walls and brown floral wallpaper in the bathroom. (As if I hadn’t learnt my lesson when, six years earlier in Zurich where I was sharing a flat with three other young women, I had redecorated the bathroom, similarly with wallpaper, which was soon peeled off by the steam. Fortunately, I had to leave for Africa just then!)

That house was the first in a series of seven; all old houses, sometimes outbuildings (servant’s quarters and storeroom) that I could convert into something the Venus in me found aesthetically pleasing, even if it meant hard labour. But then, wasn’t Venus married to Hephaistos, that god who could make metals weep?

The outbuildings to be converted by the builder and me.

Fortunately, in my fifties, I studied Astrological Psychology and discovered that what I had been doing my whole life was being myself. With an overdose of mutability (-22), I was simply someone who changed environments often, whether it was through travel (26 countries, thanks to Jupiter on the Ascendant) or new residential addresses (more than 30, aided and abetted by Uranus in the 4th house), redecorating my living spaces, renovating houses (and already thinking of the 8th which will be my last abode) and moving from job to job in advertising – the longest I stayed at any agency in almost thirty years, was fourteen months, till eventually freelancing saved the day.

Building completed with steps leading to the roof. Now for the garden!

“You are unstable!” insisted one boss when I resigned, yet again. “You keep on coming and going.”

“Yes,” I responded in jest to this man who was also a Pisces. “If a fish doesn’t move around, it is dead.”

Astrological Psychology cleared up the question in my mind: what drove me to constantly beautify my living spaces (as if I were obsessed) often at great physical and emotional pains as I would do it on a tight budget and consequently often worked with inadequately skilled labourers. Could it be the Saturn in my chart opposing Venus? Fortunately, Venus is in a 1st-house Aries and thus can assert herself and counter the Great Teacher in personal relationships.

“No, I am not putting all my energy into a man in the outer world to procreate. I am investing most of my energy in the man in my inner world to create,” said Venus.

But Saturn is in Libra, which can turn her into a tyrant of aesthetics.

“In your so-called creations, did you do your best? Is it pleasing to the eye? Did you make the most of what you’ve got? Did you do it within budget?” (Budgeting was always top of my mind due to a mother who had been a bookkeeper.) Once my living space or work space no longer acquired hard labour, I would move on to the next challenge.

The Venus in me is close to Mars (less than 6 degrees of separation) who in my life has shown himself to be Hephaistos, that crippled god who toils at his inner forge rather than consorts with the other gods on Mount Olympus. (Archetypal psychology considers him to represent introverted creativity in men.) His Piscean nature makes him the perfect man to soothe a fiery Venus. .

Mars also understands her need for air, often too much (-18), thanks to his awareness of Mercury who is in Aquarius. And the reason Mercury can see some light in the dark depths of the inner world is because he resides in the 12th house, in the realm of Pisces.

That Saturn and Venus are active in the Tyranny of Aesthetics became clear to me in the renovation of a barnlike building, formerly a panel beater’s workshop, which I’d bought as a house for my mother. It was stacked with building materials: roof rafters, corrugated iron sheets, wooden doors, steel-frame windows, cisterns, copper pipes, etc. etc. Venus laboured for almost eight years to complete the task, that is, when she hadn’t escaped to the East to be with Mercury rather than Mars. Africa (read Saturn) was tiring me with its constant physical and emotional demands and I wanted to spend some time with Mercury – it was when I studied Astrological Psychology – rather than with Mars, who is associated in my mind with the often unskilled African labourers who are indeed hard work, particularly for a woman as the ‘boss’.

Venus transformed Saturn’s abode into a pleasant living space. Never have I laboured so strenuously. With a strong cardinal drive, I did whatever it took My favourite labourer one day remarked that he’d never seen a woman work as hard as I do.

“What?” I explained to him. “Do you think I think dirty work is beneath me? I am not above it. I get above it by doing it.”

It was the Saturn in me speaking: perhaps all my doing had taught him something.

Last year, I had finally used up all the building materials I had inherited with the panel beater’s workshop.

Now in my sixties, I no longer want to do the hard, dirty work, just the fun, finishing touches.

To celebrate this turning point, I invited friends to the burning of The Working Witch who, in my imagination, was transformed by the fire into a golden Venus.