Samuel Becket. The Revelation of the Absurd. 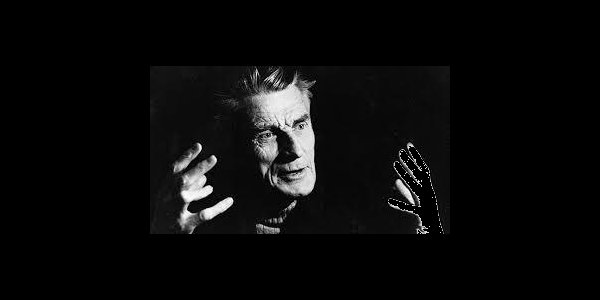 Beckett was an Irish avant-garde novelist, playwright, theatre director and poet. He spent most of his adult life in Paris, writing in both English and French. His work offers a bleak, tragicomic sense of human existence. Widely regarded as among the most influential writers of the 20th century, Beckett was a key figure in the Theatre of the Absurd. In 1969, he was awarded the Nobel Prize in Literature “for his writing, which—in new forms for the novel and drama—in the destitution of modern man acquires its elevation.”

The chart looks like a parachute landing on the right, in the YOU hemisphere where Beckett has eight planets including his strongest ego planet, Saturn. As a child already, Beckett fell from great heights without breaking a bone, yet often getting a hiding from his strict mother for climbing tall trees and then falling down, all because he wanted to fly. With his North Node on the cusp of the 10th house, it seems he was simply following the path for his soul’s journey: into rising above mundane reality.

With a strong Cardinal drive and a surplus of fire in his nature, Beckett put all this energy into tennis and cricket when he was a young man, and into writing many poems, plays and novels when he was older. (He is the only Nobel Prize winner who also played first league cricket!)

Always interested in language, he studied French, Italian and English at Trinity College, Dublin from 1923 to 1927 when his Age Point was moving out of the 3rd house of learning into the 4th house of home and tradition. His efforts were crowned in 1926 when he was elected a Scholar in Modern Languages. At the same time, his feeling of self-worth – his Moon in the 2nd house – got the approval of his Age Point sextile.

He then graduated with a BA and, after teaching briefly in Belfast during the 4th house low point, he decided to leave home and family and get to Paris where he became a lecteur d’anglais from November 1928 to 1930.

At the Saturn conjunction in 1929 – when his Age Point was moving towards the 5th house of creative self-expression – he met James Joyce who would become his master and mentor, teaching him more about language and also about the social scene in Paris. That same year, Beckett published his first work, a critical essay on Dante, Bruno, Vico and Joyce in which he defended the latter against allegations of unnecessary obscurity and dimness.

In 1930, when his Age Point was on the cusp of the 5th house, he returned to Trinity College as a lecturer. The creative parody he subsequently wrote on a non-existent poet and literary movement which was ‘at odds with all that is clear and distinct in Descartes’ upset the apple cart and Beckett resigned. It seemed that his unusual creative self-expression would not be accepted in Ireland.

He commemorated his brief academic career with the poem, Gnome which is an excellent expression of an innovative Uranus in the 3rd house of learning.

At the low point of the 5th house, Beckett’s father died. It hit him hard for his father had been his favourite parent. (His mother was a moody woman which might be behind his reluctance to have a family himself. Saturn is in his 4th house and where there is Saturn, there is fear, according to Liz Greene. The only Great Teacher he wanted was James Joyce, not his mother. He would eventually break off with her completely.)

Then he began treatment with a psychoanalyst which provided much of the material for his later works, Watt and Waiting for Godot. After this he followed the advice of the Gnome and travelled around Europe and finally settled in Paris, on the Left Bank where the creative people of that time lived.

As his Age Point was approaching the 6th house of work, Beckett published essays, reviews, books of poetry and was working on his novel Murphy. He was also thinking of studying film in Russia, pre-empting his later work as theatre director. Once he had finished Murphy, he travelled extensively in Germany where he noted his unease with the Nazis who were overtaking the country.

During WW2, his service to others would not only be writing (for his novel Watt), but also joining the French Resistance to work as a courier, as well as storing armaments in his back yard. Although he was awarded the Croix de Guerre and the Médaille de la Résistance by the French government for his efforts in fighting the German occupation, self-effacing Beckett always referred to it as ‘boy scout stuff’.

After the war, he continued to publish articles, short stories, novels and his most famous play, Waiting for Godot.

The Aspect Figures at Play

There are no fewer than ten figures in his Radix – too numerous to discuss in more detail in this article. Suffice it to say that these figures could be characters in a play of his consciousness, with names that have a touch of the theatrical about them: Magic Cap, the Surfer, Megaphone, Animated Figure, Provocative Figure, Recorder, Detective, Cradle, Decorative Figure and Ambivalence Triangle.

What five of them have in common is the opposition running through Beckett’s core on the Learning Axis. On the one hand we have innovation – as represented by Uranus in the 3rd house of learning, in his case, of language. On the other hand we have the dissolving energy of Neptune on the 9th house cusp, which enables Beckett to creatively turn the reality of the bigger picture into unreality.

This opposition is also what prevents everything falling out of the Cradle. People with the security of a quadrangular Cradle are often reluctant to get out into unknown territory, but according to the Hubers in Aspect Pattern Astrology, this is precisely what is required of them: to push against the ‘glass wall.’ In Beckett’s case, he not only pushed, but broke through the glass wall which led to his breakthrough in language.

In 1945 Beckett had – in his mother’s room in Dublin – a life changing revelation of his future direction in literature. Up to that time, he had used an erudite language, much like Joyce, resulting in several obscure passages. But then came the revelation: “I realised that Joyce had gone as far as one could in the direction of knowing more, [being] in control of one’s material. He was always adding to it; … I realised that my own way was in impoverishment, in lack of knowledge and in taking away, in subtracting rather than in adding.”

1945 was also the year when Beckett’s consciousness was brimming with the energy of his achievement-oriented Mars thanks to the AP conjunction. This in turn fired up his North Node – the way to go to be an authority in language (the revelation). Through the trine to the Sun in the 6th house of work, his mental ego was presented with the resources to facilitate his new approach to language in his writing. He now started writing in French rather than English. It was easier for him, he claimed, to thus write ‘without style.’

Having broken through the red barrier, Beckett could focus on poverty, failure, exile and loss or, as he put it, on man as a ‘non-knower’. The character Krapp in Beckett’s later play, Krapp’s Last Tape (1958), could be Beckett speaking after his revelation: it is “clear to me at last that the dark I have always struggled to keep under is in reality my most precious ally. (The last two words are not heard by the audience as the tape suddenly fast forwards). He would now turn the knowledge of writers he had read – and had till then aspired to be – into no-knowledge and not knowing.

He is most famous for the above play which was published in 1952 when his Age Point encountered Pluto in Gemini in the 8th house. Where language normally makes sense of something, Beckett’s consciousness transformed it to make no sense and thus become absurd.

The play premiered the following year when Beckett’s consciousness was opposing his feelings of self-worth, as suggested by the opposition to the Moon. But his Moon is in Sagittarius, so it is to be expected that he would adopt an adventurous attitude to normally accepted values.

His self-worth was now open to attack by audiences and critics, but his first absurd play was a huge success. Beckett had achieved what seemed impossible: a play in which nothing happens onstage, yet had audiences mesmerised, ‘glued to their seats’ as one critic commented. It was a critical, popular, and controversial success in Paris known for its avant-garde theatre goers. Over the years, it would become popular in London and New York, and hugely so in Germany. It is still performed today.

Its success opened up a career in theatre for Beckett who went on to write and direct several more acclaimed plays. In 1961 – during the AP/Sun trine – Beckett’s mental ego incurred great favour: he received the International Publishers’ Formentor Prize in recognition of his work, which he shared that year with Jorge Luis Borges (also on the blog.)

Beckett would have a powerful effect on other great writers such as Harold Pinter, Tom Stoppard and John Banville, amongst many others. His lifelong involvement with language reflects his statement to his biographer: “ … nothing matters but the writing. There has been nothing else worthwhile.”

Had he given up at the C1 in 1933 when he couldn’t get his first novel (Dream of Fair to Middling Women) published, he would never have won the Nobel Prize at the C2 in 1969. One wonders whether he would have persisted had he not had that revelation in 1945 which put him on the right path: to being an authority in the language of the absurd.