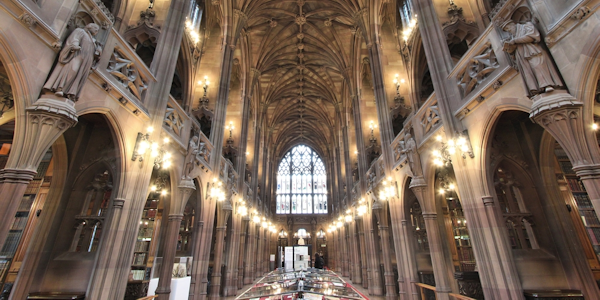 I have many times walked down Deansgate in central Manchester, England and admired the exterior of the grand Victorian gothic building that is the John Rylands Library, now part of the University of Manchester Library. It was only a few weeks ago that I first entered the building, on impulse while showing some French people around the North’s industrial capital. The library was built in memory of textile entrepreneur John Rylands, Manchester’s first multi-millionaire, by his wife Enriqueta, and open to the public in 1900. What a fine building it is, an implicit rebuke to the surrounding Manchester modernity.

Highlights include the very fine, light and airy reading room on the top floor, and the original Victorian toilets, still in use in the basement. The other floors house a large number of old books and manuscripts, some featured on display. Most famous is perhaps the oldest extant papyrus fragment of St John’s gospel from the New Testament, believe to have originated in the 2nd or 3rd century. Enthusiastic and welcoming staff, plus an in-house cafe, make for a very positive visitor experience.

What particularly caught my eye in one of the display cabinets was a copy of Ptolemy’s ‘Tetrabiblos’. Ptolemy was a polymath of Roman times, living in Alexandria c90-168AD. He wrote major treatises on Astronomy, Geography and Astrology – the latter being the Tetrabiblos, which had formative influence on the subsequent development of astrology.

As it happens, the book was open at a page containing Ptolemy’s diagram of the aspects, highlighting the sextile 60°, quartile (square) 90°, trine 120° and opposition 180°. Ptolemy also mentions elsewhere the other ’30°’ aspects – the semi-sextile 30° and the quincunx 150° – but does not imply much significance to them. In the book Aspect Pattern Astrology, Bruno Huber explains how the system of ’30°’ aspects used in astrological psychology was firmly based on Ptolemy’s work, but also indicated why the semi-sextile and quincunx aspects have come into greater prominence in more recent times.

As I understand his argument, from Roman times to the middle ages human psychology was essentially dualistic. Black-and-white thinking was the norm, while subtlety of thinking with shades of grey was not. As the Western world went through the processes of Renaissance, Reformation, revolution, development of science and ultimately the development of psychology itself, we moved into a world of much greater psychological subtlety – the awareness/thinking functions of the semi-sextile and quincunx aspects came into their own, and they thus became relevant in chart interpretation.

Of course, here I am just skating over the surface. Another key point to the Huber Method of astrological psychology is that the House System found most reliable for psychological interpretation of the the birth chart is that of Dr Koch, and the orbs used for determining validity of an aspect are specifically defined for this approach. You can find more in the above referenced Aspect Pattern Astrology, or the introductory The Cosmic Egg Timer: Introducing Astrological Psychology.

Interestingly, in the early gothic architecture, eg at St Denis or Notre Dame in Paris, the common form of arch was the Equilateral Arch, which has the characteristic that you can inscribe an equilateral triangle, comprising three trines (a ‘harmonious’ aspect), within the curved part of the arch. The Rylands arches appear to be slightly flatter than this, thus allowing more light in at the windows, as is appropriate for a library.