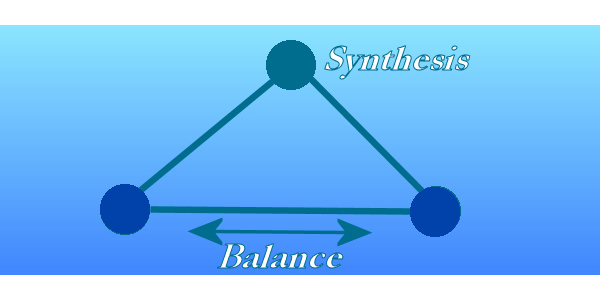 I recently came across a free pdf in the Psychosynthesis Centre: Balancing and Synthesis of the Opposites by psychologist Roberto Assagioli, one-time mentor of Bruno Huber. Quotes are from that document.

We could see existence as the dance between spirit and matter.

… all polarity is a relationship between two elements… as such, it is never absolute, but relative even to a particular pair of opposites: the same element can be positive in its relation to a certain “pole” and negative in its relation to another. An instance of the relativity of the “polar relationships” exists in the fundamental polarity between Spirit and Matter.

All polarities are reflections of that one basic spirit/matter polarity – such as inner/outer, feminine/masculine, symbolic/analytical, religion/science, labour/capital, right brain/left brain, mind/body and on and on.

Both can be examples of the creative effect of polarities. Sticking to one side or the other usually means stasis. So efforts of, say, the political left or right to ‘finally win the argument’ are doomed to failure!

Assagioli makes interesting observation on the key polarity between mind and heart:

The polarity between ‘mind’ and ‘heart’, between reason and feeling, is regulated in the first place by the recognition of their respective functions and of the legitimate field of action of each of the two functions, so that neither dominates the other. This can be followed by a mutual and increasing cooperation and interpenetration between the two, finally arriving at the synthesis so well expressed by Dante in the words “Intellectual light full of love.”

He concludes with the essential principle of synthesis:

A clear understanding of this process of synthesis enables one to achieve it more easily and rapidly. The essential requirement… is to avoid identifying oneself with either of the two opposite poles, and to control, transmute, and direct their energies from a higher center of awareness and power.

Of course, Assagioli invented the psychology of psychosynthesis.

So what has this to do with astrology? Well a lot!

The astrological chart comprises a large number of polarities, such as those identified in The Astrological Houses by Bruno & Louise Huber. For example:

And then there are the 6 inherent polarities of the signs of the zodiac, the fundamental polarity between the chart’s centre circle and the outside circle of the houses (Spirit/Matter), the levels of operation of the planets, the planetary archetypes themselves…

So yes, astrology and astrological psychology are all about the dance of polarities, balance and synthesis.

It may be no coincidence that Assagioli encouraged Bruno Huber in his early astrological investigations.

An earlier short form without the astrology appeared recently on my personal blog.