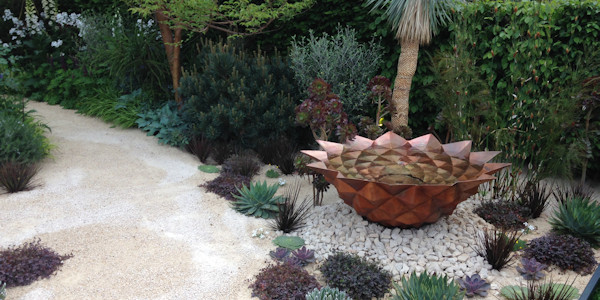 On Saturday 28 May, we were at the Chelsea Flower Show, admiring extensive show gardens, smaller artisan gardens, and the magnificent array of flowers and fruits within the pavilion. There seemed to be fewer artisan gardens than previously, and they were vying for innovative use of tiny spaces. By contrast, the show gardens were less colourful than in some years, with the emphasis being on tranquillity, mindfulness, and the healing and restorative energy of plants. Many gardens exhibited gentle or burnished orange harmonizing with green foliage, green being, according to the synesthetic artist, Kandinsky, ‘the most restful colour that exists… represented by the placid, middle notes of a violin’. The Daily Telegraph, ‘best in show’, featured bronze standing stones, flame-coloured lupines and a brazier on the patio. In Concerning the Spiritual in Art, Kandinsky wrote of orange:

Warm red, intensified by a suitable yellow, is orange. This blend brings red almost to the point of spreading out towards the spectator. But the element of red is always sufficiently strong to keep the colour from flippancy. Orange is like a man, convinced of his own powers. Its note is that of the angelus, or of an old violin.

For the Huber astrologer, orange is the colour of the conjunction, where two planetary drives meet and merge, germinating a new seed, while green is the colour of earth and the consciousness-raising semi-sextile and quincunx aspects.

Notwithstanding its award of a Silver Gilt rather than a Gold Medal by the judges, we were particularly fascinated by The Winton Beauty of Mathematics Garden, with its light and dark green heights and spirals, copper orange conductors, and deep pinks and mauves. The designer, Nick Bailey explained:

Every plant is driven by mathematical algorithms, which are represented throughout the garden. The copper water bowl emulates a mathematically perfect Fibonacci spiral on a seed, which germinates in the form of the copper band and becomes variously a seat, stair, bannister and planter as it ‘grows’ up to the top of the belvedere. Cut through the band are real plant growth algorithms. Fibonacci numbers feature heavily in the garden too, in the form of plants which show this numerical pattern in their seeds, leaves and forms.

This peaceful garden with its swirling geometrical concept and rings of orchestrated blooms reminds us of the intrinsic mathematical correspondences connecting nature, humanity, and the cosmos.

Here we see the golden section expressed in nature through the Fibonacci sequence, which is also replicated in our fingers and teeth. Humanity is represented geometrically by the pentagram, as in Leonardo da Vinci’s Vitruvian Man.

The pentagram divides the circle into 5 x 72, and the Huber Age Progression cycle is 72 years spread over four quadrants extending outwards to embrace the world at the four angles and plumbing the depths in the fixed houses.

Every point of intersection on the arms of the pentagram establishes a golden relationship between the smaller portion of 0.382 and the larger portion of 0.618 making the line. In a clockwise direction, the application of the golden mean to each house gives us the invert or balance point, while the counter-clockwise or cosmic direction gives us the low point. If we look at a cross section of a single astrological house from the cusp to the low point, we can see how a line divided according the golden mean replicates the personal journey from extrovert rise of the intensity wave at the cusp to introspective dip around the low point. There, the individual makes a shift of consciousness from indrawn fixity to mutable awareness, taking stock of the situation before progressing to the next phase at the upcoming cusp.

Such reflections remind us of the equations and geometry underpinning all life. Before the age of computers, good astrologers had to be brilliant mathematicians, and it’s helpful to understand the layers of calculation and fusion of numbers, colours, and sounds that lead us into meditation and interpretation while relaxing in a garden.