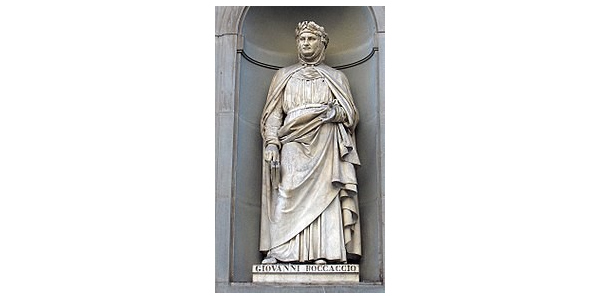 Together with Dante Alighieri and Francesco Petrarch, Giovanni Boccaccio is part of the so-called “Three Crowns” of Italian Renaissance Literature and Poetry. Their works initiated the dramatic change western civilisation was about to undergo. They revolutionised literature even before the development of the printing press.

Boccaccio is best known for The Decameron. Together with his contemporary friend and teacher Petrarch, he laid the foundations of Renaissance Humanism. In the twentieth century, his Decameron was transposed to the big screen by the director Pier Paolo Pasolini.

There is no correct birth time for Boccaccio, so I have set his chart at midday. To see which aspect structures are there or not (to a lesser or greater degree), I looked at birth times at each of the 24 hours. The only aspect structure that doesn’t appear at every hour is the opposition between Jupiter and the Moon.

Making up his Mind

Learning was the dominant energy in Boccaccio as indicated by the three planets in Gemini – the Sun/Mercury/Jupiter  – and the preponderance of thought-related quincunxes in his chart. His Mercury was constantly flitting about gathering facts which were stored in his Mind as symbolised by the Sun. In addition, Jupiter constantly took these two energies on further adventures in learning to discover unknown areas in human consciousness

When his father took him away from Florence, where he was born (out of wedlock) to Naples in 1326 – his Age Point was then in the 3rd house of learning – his education started with an introduction to the works of Dante. Later in his life, he would become the one who initiated Dante’s criticism and philology. He gave a series of lectures on Dante at the Santo Stefano church in 1373 and these resulted in his final major work, the detailed Exposition on Dante’s Divine Comedy.

His father was a merchant banker for a wealthy family in Naples and wanted his son to enter the profession of banking, thus following the family tradition. Boccaccio obliged, but soon wanted to rather study Law which he did for the next six years. Neither fields of study were close to his heart, but at the University in Naples, he could also pursue his interest in scientific, archaeological and literary studies.

In addition to learning widely, he made contact with fellow scholars. Among them was an author of a collection of myths, some Humanists and a theologian – a fact which gives us an idea of Boccaccio’s ever widening consciousness. The North Node, conjunct the above-mentioned learning constellation in his consciousness, indicated that it was the right way for him to go on his soul’s journey. And thanks to the two quincunxes linking the Sun/Mercury to Neptune and Saturn, his education was both creative and scholarly.

Boccaccio certainly had a dominant presence as represented by the direct Dominant Triangle: some scholars see him as the greatest European prose writer of his time: “a versatile writer who amalgamated different literary trends and genres, making them converge in original works, thanks to a creative activity exercised under the banner of experimentalism.” (Wikipedia)  But then, his Neptune is in transformative Scorpio and his Pluto in creative Pisces at the red/green angle of the Dominant Triangle, so experiments with and breakthroughs in creativity are what stood out in Boccaccio.

While his Age Point was traversing the 4th and 5th houses, he also wrote short stories, meeting the demands of the latter house’s creative self-expression. These became the sources for some of Chaucer‘s tales. But his true vocation was poetry. He thus also wrote The Hunt of Diana, a poem listing Neapolitan women.

His Venus at the green/blue angle of the Dominant Triangle is in Leo, and his sense of aesthetics was reflected in both his leonine creativity and his great respect for the feminine. Much of his writing focuses on women: in his most famous work, The Decameron, seven of the ten storytellers are female. In the second half of his life, he also wrote specific stories On Famous Women.

Yet the Mars in him never married. Perhaps it was too involved in the ‘film’ the Projection Figure – with Neptune operating the projector – was showing him: that of his adventurous learning and of his revolutionary creativity.

When his Age Point was on the DC in 1349, at age 36, he began work on The Decameron. It was completed in 1352 (and revised in 1373).  It consists of 100 tales told over ten days, by ten people who, in 1348, fled Florence where the Black Death killed three-quarters of the city’s population, to the countryside, regaling each other with their stories. Several tales tell of men, including members of the clergy (abbots and priests), who ”lieth with women.”

”…if perchance, there be therein some tittle, some wordlet two freer, maybe, than liketh your squeamish hypocritical prudes, who weigh words rather than deeds and study more to appear, than to be, good., I say that it should no more be forbidden me to write…hole and peg and mortar and pestle…”

It was his final effort in imaginative literature, as if creative Neptune no longer ruled his consciousness, but Saturn, the Great Teacher, did. A decade later, after a shift in his consciousness (perhaps the time of the C1 or 2?) he declared that The Decameron was profane. Another decade later, he revised it.

It was also one of his last works in the Tuscan vernacular, as if his home language were too vulgar for Saturn. Writing in Latin, he created a more realistic dialogue which differed from his contemporary (medieval) writers.  His influence was not only on the Italian cultural scene, but also that of England and Spain where he influenced authors such as already mentioned Chaucer, and Miguel de Cervantes (also on this blog).

Boccaccio returned to Florence in early 1341, avoiding the plague of 1340 in Naples, but also missing the visit of Petrarch to Naples that same year. That would have to wait till 1350.  He continued to work, although dissatisfied with his return to Florence, producing different works ranging from prose and poems over the next few years. .

A Change of Direction

Following the direction of his North Node, which guides his Sun/Mercury/Jupiter, Boccaccio now changed its course somewhat. With his Age Point in the third quadrant of Thinking, he became closely involved with Italian Humanism and also with the Florentine government which sent him on official missions in Italy, Germany and France. In these years, he also took minor orders.

The crucial event in 1350 was his official reception of Petrarch in Florence, as well as privately in his home. His Age Point was now in the 7th house and there is no doubt that Petrarch became his closest personal relationship.  Boccaccio saw Petrarch as his teacher and magister, who encouraged him to study classical Greek and Latin literature.

The discussions between the two were instrumental in Boccaccio writing one of the key reference works on classical mythology, which served as an extended defence for the studies of ancient literature and thought. Despite the pagan beliefs in mythology, Boccaccio believed that much could be learned from antiquity, thus challenging the arguments of clerical intellectuals who feared the moral harm these writings could do to Christian readers. Boccaccio’s revival and defence of classical antiquity became a foundation of the Renaissance. His interest in myths would result, once again 700 years later, in writers like Joseph Campbell and psychologists like Carl Jung adding the symbolical and subconscious interpretations of these myths.

Some sources also see a conversion of Boccaccio by Petrarch from the open humanist of The Decameron to a more ascetic style, closer to the dominant 14th Century ethos. In 1359, when his Age Point was in the 8th house of paying one’s dues, Boccaccio took some kind of religious mantle. He now changed direction from the profane to the sacred, following in the footsteps of Petrarch, who was a solitary, ascetic person. As early as 1360, moreover, Boccaccio’s way of life was regarded as austere enough to justify his being entrusted with a pastoral cure of souls in a cathedral.

Of his later works, the moralistic biographies (1355–74) and a dictionary of geographical allusions in classical literature were most significant.  In 1360, Boccaccio began work on a book offering biographies of one hundred and six famous women, that he completed in 1374, shortly before his death a year later. In 1361 Boccaccio left Florence and returned to Certaldo, where he was born. He only returned to work for the government in 1365, which sent him on missions to Naples, Padua and Venice.

It was in Venice that he met up with Petrarch in grand style at his residence, Palazzo Molina, with its vast library. He would only see his magister once more before his death in 1374. Boccaccio wrote a commemorative poem for Petrarch, including it in his collection of lyric poems, the Rime.

His Age Point was then in the 11th house of like-minded people and he lost his mentor, the one who had contributed most to his Being.

Featured image shows 1845 statue of Boccaccio by Fantacchiotti in the Uffizi Gallery.