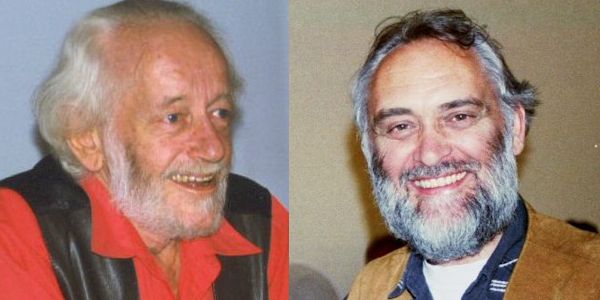 This brief appreciation, by psychoanalyst and API tutor Wolfhard König, recently appeared in the German-language magazine AstroLog October/November 2014. It has been translated by Heather Ross. The picture shows Bruno on his last visit to England in 1998, together with Wolfhard at a seminar he gave in Wales in 2001.

Fifteen years have now passed since Bruno Huber, API founder and philanthropist, passed away on 3rd November 1999. How those fifteen years have flown by! For nine years, it was more or less business as usual at the Astrological Psychology Institute in Adliswil. It was not until the tenth year after his death that several small astrological institutes were created, which have been spreading his ideas and unique holistic horoscope interpretation technique ever since. This was done in line with his own (and Roberto Assagioli’s) expressed desire to disseminate the theory in different ways throughout the world. His life’s work has been greatly appreciated and much commented upon.

What did I find striking and particularly impressive in the years from 1971 to 1999 when I had personal contact with him?

For me, the most impressive thing was Bruno’s personal integrity. One could talk to him about any subject and he always remained calm and compassionate. He always listened when he was approached seriously with a genuine question. Personal prejudices rarely, if ever, caused him to become hostile. It is all too common for people to lose their cool and even become paranoid when faced with issues that touch on personal weak spots, and for this to cause them to spread lies and hatch intrigues, etc. So many conversations break down due to some neurotic misunderstanding!

I am deeply grateful to have almost never experienced this with Bruno. This is why my conversations with him were so fruitful and enjoyable, because they were always conducted in a spirit of fairness and openness, even in the event of differences of opinion, of which there were many.

I have only ever talked to one or two other people in my life who I could say this about. Thank you Bruno!