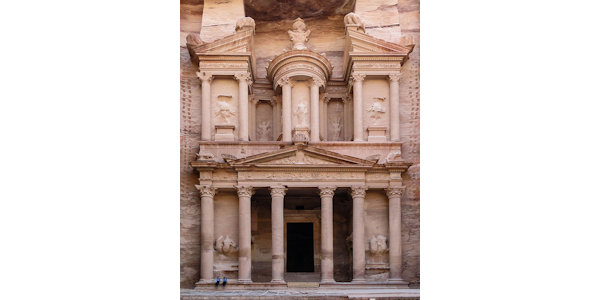 Johann Ludwig (also known as John Lewis, Jean Louis) Burckhardt was a Swiss traveller, geographer and orientalist, best known for discovering the ruins of the ancient city of Petra in Jordan.

Born in Lausanne, Switzerland on 29 November 1784. There is no birth time so I have set it at midday.

The Man and his Mask

he chart has two distinct aspect figures, much like the real Burckhardt and the Arab ‘mask’ he presented to the world on his travels in Syria, Egypt and Africa to hide his European identity.

Jupiter is conjunct his North Node, suggesting that travelling to expand his views and get better insights into other cultures and climes, in his case, of Syria, Egypt and Africa was the right direction for him to take in this lifetime.

Burckhardt was born into a wealthy family of silk merchants in Lausanne. The family lived in a beautiful mansion called the Kirschgarten – the Cherry Orchard. He idolised his mother and had respect for his father who could be too strict, not wanting his children to have an easy life. In his early twenties, Burckhardt would change the green foliage and red cherries of the easy life for the endless sand and vast sky of the difficult desert life. In her Burckhardt biography Katharine Sim writes about his passionate love of the desert, “its simplicity, beauty and cleanliness in refreshing contrast with the complexity and unnaturalness of life in towns.”

While his Age Point was traversing the 3rd house of learning, he went to Leipzig University (aged only 16) and then on to Göttingen University. In Leipzig he lost a lot of money gambling. Sim believes this is what caused a major change in him. (This could be the C1.) He was guilt-ridden for years and changed his materialistic behaviour from then on. As if his Jupiter didn’t want him to have risky financial adventures, but daring travel adventures.

With his Age Point in the 4th house of home and family, he travelled to England which he found very familiar (1806). He soon spoke English in addition to German and French, but couldn’t find work in the civil service, so he took employment with the African Association which wanted to resolve some of the problems regarding the course of the Niger River. The expedition called for an overland journey from Cairo to Timbuktu. To prepare for the journey, he attended Cambridge University and studied Arabic, science and medicine. At this time he also started dressing like an Arab.

As his Age Point was moving through the 5th house, it was time to make an impression on the world. He was 25 (1809) when he went to Aleppo in Syria where he stayed for 2 years, perfecting his language, looks and behaviour and adopting the moniker Sheikh Ibrahim Ibn Abdullah. While in Syria, he investigated local languages and archaeological sites and became the first discoverer of Hittite hieroglyphs – a treasure Jupiter would be proud of.

Burckhardt did not participate in the entertainment of the 5th–house as Sim points out: “Another man might (…) have succumbed to the voluptuous Abyssinian beauties in the Sudan who entertained the traders openly and unashamedly each night with their regal charms and their intoxicating liquor.” Although he often felt lonely, Burckhardt had to keep to himself for protection in such foreign lands, gathering information to make an impression, not on the social, but on the scientific scene.

There is an opposition running through his core between Saturn and Uranus, simply put, between discipline and freedom. Sim often mentions his strict personal rules, as for example in a letter to his parents: “If I do my duty in such a creditable enterprise, my mind will be cheerful even if I sleep on the ground and live on flour and water.”

No matter how much he savoured the freedom of the desert (Uranus), he was very disciplined (Saturn) in everything he did, from studying English and Arabic and the Muslim faith to becoming Sheik Ibrahim and, once in the Middle East, writing copious letters to his mother and seven detailed volumes in English for his employer, which included the most accurate account of the holy city ever received in Europe.

He also made the pilgrimage to Mecca as this would enhance his credentials as a Muslim on his journey to Timbuktu. Despite becoming sick with dysentery, he spent several months in Mecca performing the various rituals associated with the Hajj which, in those days, was unheard of for a European. He wrote detailed observations of the city and the customs and culture of the local inhabitants.

The Saturn/Uranus opposition also affected his ongoing learning, as suggested by several Learning Triangles in his chart. No matter how free he felt in the desert travelling with a caravan of Bedouins or alone on a donkey up the Nile River (in 1813 when he discovered the Great Temple of Rameses II at Abu Simbel), he always did his duty.

Throughout his late twenties, his learning about countries unknown to the Western world at the beginning of the 19th century was constant, but not always easy, as Sim notes: “He was robbed, stripped naked, blistered by the sun, in frequent danger, but learning all the while.”

Burckhardt has the Sun conjunct Mercury indicating that his mental ego and his fact-gathering energy worked together. This is reflected in his keen observation of unknown territories and writing reports on the often dangerous tribes he encountered. His collection of oriental manuscripts totalled 800 volumes by his early thirties! (He bequeathed them to the library of Cambridge University.)

In 1812, on his way to Cairo along the more dangerous inland route to Aqaba, he thought the ancient Nabataean city of Petra might lie behind a rock façade. But to protect himself in case his guide thought he was a plunderer, he maintained he was looking for the grave of Aaron.

e had to walk more than a mile in a dark passage which eventually opened on to the magnificent view of Petra’s roseate building.

Burckhardt describes his discovery in Travels in Syria and the Holy Land:

“An excavated mausoleum came in view, the situation and beauty of which are calculated to make an extraordinary impression upon the traveller, after having traversed for nearly half an hour such a gloomy and almost subterraneous passage as I have described.”

From here to Timbuktu?

Back in Cairo, he became sick for the second time with dysentery and spent three months recovering. His Age Point was now in the 6th house of work and, over the next two years, he feverishly edited his journals while waiting and preparing for the caravan that would take him west across the Sahara to Timbuktu. But he was stricken again with dysentery and would never get there.

He died in Cairo at the age of 33. He was buried as a Muslim, and the tombstone over his grave bears the name of Sheik Ibrahim.