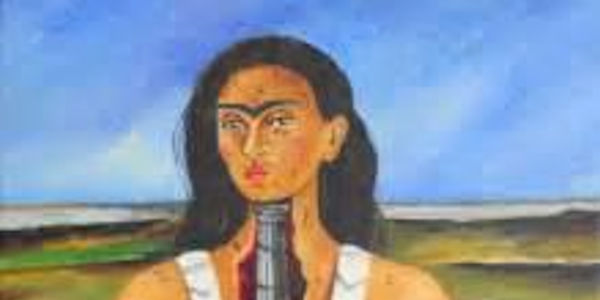 The first thing that catches the eye in Mexican painter Frida Kahlo’s chart is the red band running through her core, much like the steel handrail that pierced her body in a bus accident at age 18. This injury would cause complications throughout her life. With Saturn – her physical ego – as her strongest personal planet, she survived many failed operations. Her paintings regularly depict a wounded, broken body. She also used her body to explore questions on social roles, often painting it in unconventional situations: during miscarriages and birth, and in cross-dressing.

Emotionally she suffered too, with four oppositions tearing her apart in her relationships. With an overdose of water in her temperament (-7), she experienced intense emotions. Fortunately, she also has a surplus of cardinal motivation (-19) to live her life despite the suffering. And she lived it her way – she has 7 planets on the I-side of the chart, which also explains why she painted predominantly self-portraits. She died at the age of 47, after the low-point of the 8th house, that place of death and rebirth.

With most planets in the Being quadrant, Frida’s core was exposed to the 1st, 2nd, 3rd, 4th, 6th and 7th houses. In addition, from the age of 7 to 32, her consciousness was opposed by 8 planetary energies, including all three ego planets.

The oppositions at her centre are on the Relationship Axis between the Sun conjunct Neptune in the 11th house and her Uranus conjunct Mars in the 5th house: her creative philosophy and her innovative art were at loggerheads throughout her life. Always aware of what the art world considered ‘art’, she developed her own style. Later in life, she had problems with commissions, not wanting to change her style to suit the client. Many of her paintings depict opposites, be they of life and death, Mexican and European, male and female.

Her father was also disabled – as she was. She got polio at the age of 6 and experienced her first low point soon thereafter. She never got on well with her mother, but her father’s Cancerian qualities made life easier. “… he was an immense example to me of tenderness, of work (photographer and also painter), and above all in understanding for all my problems”. As a representation of the Sun in her childhood, he taught her much about literature, art, nature and philosophy. He also encouraged her to play sports to regain her strength.

A good example of this Sun/Neptune and Uranus/Mars opposition happened when Frida was in Paris just before the war. The Surrealists such as André Breton, Picasso and Miró celebrated her art, but she thought they were “a bunch of coocoo lunatics and very stupid surrealists.” With her Uranus and Mars in Capricorn, she wanted a down-to-earth form of art.

Later in life, her mind focused more on questions of identity, gender, colonialism, class and race in Mexican society. She found the Americans ‘boring’ and hated socialising with capitalists like the Fords. To a friend, she wrote: “It is terrifying to see the rich having parties day and night while thousands (…) of people are dying of hunger.”

In 1922 when her Mercury was activated, Frida was one of the 35 girls in an otherwise boy school of 2 000 students. Could it be the beginning of her feminism in a Mexico known for its machismo? While her age point was going through Scorpio in the third house, she formed a group with nine schoolmates who later became proponents of the Mexican intellectual elite. They were against conservatism. Like Scorpio, they wanted a transformation of prevailing thinking, a birth of a new consciousness. She also joined the Communist Party during this time.

Her Venus is conjunct Pluto on the 11th house cusp, as if the woman in her always had a sense of death. Is that black bird on her brow in her self-portraits an expression of her awareness of darkness, of death? In many of her paintings, the animals ‘on her back’ – mostly monkeys – are black. Perhaps this reflects the words of a close friend: “She lived dying.”

Venus and Pluto are at the red/green angle of the Medium Learning Triangle, the only aspect figure in an otherwise linear chart. Ignited by Saturn in a creative (Pisces) 8th house, Frida Frida paid her dues with a plethora of paintings. The trine to the North Node/Jupiter at the last angle of the triangle suggests that she was on the right path for her soul’s journey. It seems her physical suffering was part of that journey – it certainly inspired most of her art. And as the learning triangle is direct, the hard lessons were soon learnt. Respite from the physical agony throughout her life came in the form of a sextile to her Moon, lifting her heart to the highest point in the chart, the MC.

In 1932 when she was still facing the two oppositions from Pluto and Venus from the year before, Kahlo had a failed abortion, then a miscarriage which caused a life threatening haemorrhage. Her mother also died that year. Frida’s paintings during this time reflected themes of “terror, suffering, wounds and pain.”

The Man in Her

With her Mars conjunct Uranus in the 5th house of creative self-expression, Frida was attracted to men who were predominantly innovative artists. After the 4th-house low point in 1929, she married Diego Rivera, the famous Mexican muralist. While her age point was moving through the area of family and community, Frida changed her artistic style, drawing inspiration from Mexican folk art. She also started wearing traditional Mexican clothing. It was her way of expressing her anti-colonial stance.

Rivera and Frida both had several extramarital affairs, but the one that hit her hardest was his infidelity with her sister in 1935. Her age point was opposing the Sun, conjoining Mars and moving over the low point of the 5th house, as if the man who was right for her body, wasn’t right for her mind. In addition to Rivera’s heart-breaking affair with her sister, Frida had more medical problems.

With her age point moving through the 5th house, Frida started making an impression on the world in interviews in Detroit and New York. Her longing to travel as suggested by the Jupiter quincunx shortly after her marriage was fulfilled when she and Rivera went to San Francisco. He had been commissioned to do a mural there.

In 1934, back in Mexico. Kahlo and Rivera moved into a bohemian residence. As if to reflect all the oppositions in her, the house consisted of two buildings joined by a bridge. Later this house – called Casa Azul – became a meeting place for artists and political activists. Today it is the Frida Kahlo Museum.

Pre-empting her consciousness on the cusp of the 6th house, that of work and service to others, Frida resumed her political activities. With Rivera she petitioned the Mexican government to grant asylum to Leon Trotsky, a former Soviet leader with whom Frida had a short affair.

In 1938 when her consciousness was at ease thanks to the sextile to Saturn and the trine to the Moon, Frida travelled alone to New York. Her colourful Mexican outfits caused a 5th-house sensation. Her exhibition coincided with her age point entering Aquarius, and like-minded female artists were positive about her paintings, She sold half of the 25 exhibited, despite the Great Depression. (She also had several love affairs.)

In 1939 she went to Paris where she was praised by the Surrealists who were, like her age point, the polar opposite of her thinking, her Mercury. She didn’t sell paintings – due to the looming World War – but the Louvre bought one, making her the first Mexican artist to feature in its collection.

During the C1 in the 6th house in 1940, Frida and Rivera divorced. Her work was now the focus of her life. It was one of her most productive periods, painting on much larger canvases. She was determined to become financially independent. There were three exhibitions of her work in that year, but her health was in decline and all the alcohol she consumed didn’t help. In December, she and Rivera remarried.

Kahlo had increasing health problems from 1940 till her death in 1954. She wore 28 separate supporting corsets made from steel, leather or plastic. Her father died at the low point of the 6th house and Frida went into a deep depression, longing for him and the creative world he had introduced her to – as suggested by the quincunx to the Sun.

As her age point traversed the 6th house, appreciation for her art grew both in America and Mexico. Her work also included service to others: she taught at the Art School, La Esmeralda, and got three commissions for her students to paint murals. By the mid forties, her painful spine made standing difficult. She had a complicated operation in New York, but it was a failure. Her paintings reflect her suffering at this time. She was now confined to her house and used either a wheelchair or crutches to move around. As if to reflect her stationary condition, she now painted mostly still lifes.

When her age point moved through the 8th house, Frida paid her dues to society by dedicating her time to political causes. “…until now I have managed simply a honest expression of my own self (…) I must struggle (…) to ensure that the little positive my health allows me to do also benefits the Revolution, the only real reason to live.” Her style of painting now became more “intense and feverish.”

From 1952 till her death in 1954, the painful oppositions running through her core were activated for a final time. Frida suffered more physical problems – gangrene and amputation of a lower leg – as she wrote in her diary: “…they have given me centuries of torture.” She considered suicide when Diego had yet another affair. Her last three paintings were of a political nature and a still life called Viva la Vita – Long live Life. After these, she drew only black angels in her diary, with her last words:

I joyfully await the exit – and hope never to return – Frida.