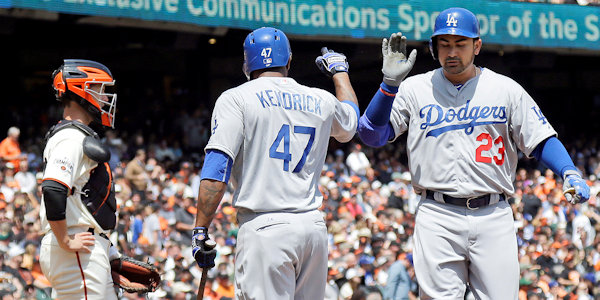 Moderator’s note: I have received this unusual post from APA member Morris Bodnar. Its subject is not the development of the individual psyche, which is the normal context of astrological psychology, and was the focus of the researches of Bruno & Louise Huber. This post seeks to apply some aspects of the Huber approach, in conjunction with more traditional astrological techniques, to the forecasting the result of a baseball game. Of course, forecasting and fortune telling were anathema to the Hubers, but members may be interested in Morris’s approach.

This method that I have created works on any type of competition: soccer, football, hockey, baseball, boxing, wrestling, tennis, horse racing, even chess. Since yesterday the baseball season opened, I will use a baseball game event chart.

San Francisco Giants visit the home team Los Angeles. You look up a game preview and bookie odds on the internet. The Dodgers pitcher is the best in baseball, Kershaw and the Giants are starting an unknown rookie. The odds are 50 to 1 with Dodgers as favorites, so give them the 1st House and 10th of fame. The Underdog Giants get the 7th House, which will be their 1st House and the 4th House which will be their 10th of fame.

We see that the event chart has a TALENT TRIANGLE, Moon-Jupiter-Pluto. This Talent Triangle favors the Giants. The FOCUS POINT of this triangle is Jupiter in Scorpio. The Vertex reveals the winner and how the game will be won. Jupiter is the Giant’s ruler. Jupiter in the triangle joins Pluto and Jupiter-Pluto symbolism suggest a powerful event will determine the winner. In baseball, a powerful event is a HOMERUN. The game was won by a homerun.

The sign that Jupiter is in will determine the hero or the most valuable player of the game. Jupiter is in Scorpio and the player who won the game by hitting a homerun was a Scorpio. Final score, underdog Giants won 1-0. See the Huber structure chart below for further understanding of the technique.

Notice that the Dodger pitcher, indicated by Mercury in Aries receives no favorable aspects, thus he received no run support from his teammates. Merc is in combustion by the Sun. His Merc is in a SEARCHING TRIANGLE, indicating he is still “Searching” for his first win.