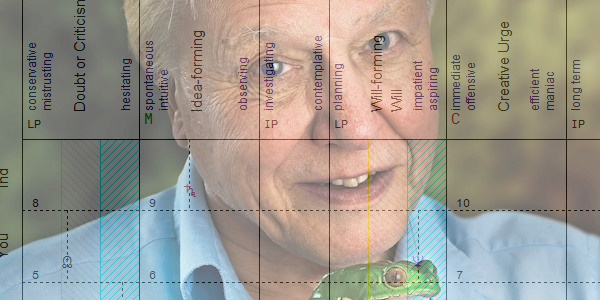 His Behaviour Pattern or Modus Operandi

Marilyn Burnett adds a further perspective on David Attenborough’s chart to that given in Joyce’s previous post.

Having enjoyed the re-look at David Attenborough’s chart by Joyce, I was inspired to look at it in the light of the Hubers’ Dynamic Quadrants. This shows the chart as a pattern of behaviour, a sequence or personal script that we intuitively drop into in order to tackle life. Our pattern of behaviour always commences at the Low Point of the Fixed house and we are propelled forward through Mutable (thought), Cardinal (energy) and Fixed (form) stages in a unending dynamic process. We are driven by each planet one by one across the page through the different phases regardless of the quadrant they are actually in in the chart.

For Attenborough, following a state of rest and well-being as his energy moves out of the Fixed Low Point and into the Doubt and Criticism phase where niggles and concerns arise, the North Node will begin to trigger the expectation of new opportunities. With Sun also in this Doubt and Criticism phase, he will be aware of himself and will begin to feel dissatisfied with the way he is. He will immediately orient himself with great self-determination, or by being ‘his own person’ as Joyce put, it towards his next project.

Then Saturn will kick-in in the Idea Formation phase, slowing him down and advising caution, so he must take a reality check and his latest idea must become workable. He must consider which project is the most promising and work steadily towards organising it (so that it can be faithfully recorded and ‘reflected back to us’ as suggested by Joyce perhaps).

With Neptune next in the process, in the Will-Formation phase, he is probably inspired by very high ideals and everything will be organised with a wonderful model in mind.

Then comes Jupiter riding right on the crest of the Cardinal wave. Propelled by optimism, intuition and enthusiasm and the ‘boyish excitement’ mentioned by Joyce, he will be imbued with an urge to venture boldly into the wider world, to explore and to find the weird, the wonderful and the unusual (Jupiter in Aquarius). He will act on these plans ‘unstoppably’ as the Mars energy moves towards the balance Point of the Cardinal house.

In the Consolidation phase, Moon will seek to connect with the world and to share the experiences with you and me. Uranus in this phase will take pleasure in the finished production and the progress that has been made….. but perhaps he will not be able to resist tweaking the editing! Probably even in this stage he will be ready to take risks with the final production in order to ensure its success. Venus will no doubt now be seeking comfort in the achievement (according to the Regulus astrology computer program, he has a Deck Chair aspect figure in his chart (not described by Huber), so it makes me wonder if this is the point where he will actually sit down and relax briefly before the whole behaviour pattern eventually sets off again!

With Mercury in the Utilisation phase he will ground the idea or the production by sharing or broadcasting his amazing natural world experiences to us lucky people.

The final phase is Enjoyment and Preservation, and as Pluto is here, it suggests that it has ultimately been done for a greater plan, for the benefit of mankind and to aid the evolution of consciousness.

The Huber concept of the Dynamic Quadrants is found in ‘Transformation: Astrology as a Spiritual Path’, by Bruno & Louise Huber.