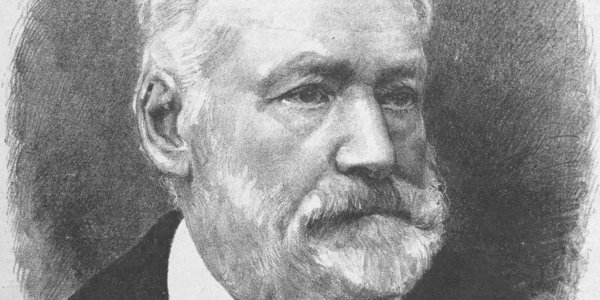 This post by Wanda Smit is the first part of an article available in full to members in the APA Members’ Area.

Victor Hugo’s chart image resembles a boat firmly anchored in the collective sphere where most of Hugo’s planets reside. Its two sails with Jupiter conjunct Saturn and Uranus at the top are what propelled Hugo forward. ‘He was the one who forever moved on, striding ahead.’ At the end of his life, admirers would fondly call him The Old Man of the Sea.

The chart is made up of linears and triangles, underpinning Hugo’s constant doing and thinking. It lies in the Fixed Cross suggesting a drive to maintain security. As a child already during a Scorpionic phase that led to the loss of his father – to another woman and another country – and of the family’s financial security, Hugo knew poverty. Throughout his life, he kept strict accounts of his own expenditure and demanded the same of his wife and his mistress.

Hugo’s main area of engagement was in the second quadrant, that of instinct, which includes family, making an impression on the social scene and delivering service to others. Family was all important to him: he wrote many odes to his wife, Adele, and his four children, and later in life, to his grandchildren. (He was in fact the first poet who made the Child a subject of literature.) He was an excellent paterfamilias, aided and abetted by his Mars in an idealistic 4th house, but where he shone most brilliantly, was in the literary salons of Paris and the political podiums from which he fought for universal suffrage.

In the radix, Hugo’s centre is exposed to intrusion from the sixth to the 11th houses. Fortunately, in the house chart – and thus how he experienced reality – his core is protected by a long green aspect linking his Mercury and Jupiter. From the outside, he looked green, like the thinker and dreamer he was. The overabundance of green aspects is reflected in Hugo’s ‘unusual superfluity of cerebral activity’ as one critic put it. But on the inside, he was fired up by the augmented inner tension of powerful oppositions on the relationship axis.

The three oppositions running through Hugo’s core most likely underlay what his biographer, Andre Maurois, said of him:

He was a mass of contrasts. The dualism within himself of mother-father, Christianity-Voltaire (and his deism), beauty-cruelty, joys-nightmares, and angel-faun…

His Sun is in the 5th house of socialising, creativity and children, and in all three cases, he shone blindingly bright. According to his contemporary, Emile Deschamps: “Victor Hugo turns out odes and children without pausing.” This was also due to his excessive Cardinal – and carnal – drive. Writes Maurois:

The dionysiac virility, which might have imperilled his mental balance, he expanded in bouts of triumphant sensuality, in walking; in riding, sea bathing and nocturnal expeditions.

Physically he had a strong presence – his Sun is conjunct earth-quaking Pluto – especially when his grandiloquence took over. With Libra as his rising sign, he charmed guests at fashionable literary salons, as well as monarchists, and later, republicans. His creativity manifested itself in Romantic poetry which was then as fashionable as pop songs are today.

His Sun is directly opposed by Saturn/Jupiter in the 11th house of ideals and like minded people. And indeed, he was criticised by several other poets and writers for being too excessive, particularly emotionally. The leading critic at the time, Saint-Beuve, wrote to Hugo – as if restrictive Saturn were speaking to expansive Jupiter:

My criticisms all come back to (…) a weakness in your talent (…) – excess; forcefulness carried to extremes.

[Further interpretation of Hugo’s chart is contained in the full article, available to members in the APA Members’ Area.]