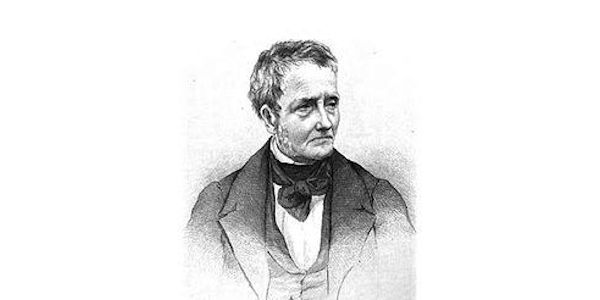 Thomas de Quincey. The Chart of an English Opium Eater.

Best-known for his novel Confessions of an English Opium Eater, Thomas de Quincey was one of the most prolific English writers of his time. Almost two centuries ago, he also started the tradition of addiction literature in the West, resulting in the drug-induced writing of the seventies.

There is no birth time for De Quincey. I have set it at around 02:30 by looking at the most important date in his life, namely the beginning of his opium addiction in 1804. I was in two minds about putting Neptune at that date or Jupiter at 1802 when his travels started.– both energies being at the poles of his Individual Axis. I settled on Neptune as it is the planet of the dissolution of alcohol and drugs. Also, more planetary energies correspond with other events in his life if the age point conjoins Neptune in1804 than they do with Jupiter in 1802.

[Editor’s note: Wanda’s observations about the houses and age progression are dependant on this simple chart rectification assumption.]

Both these planets rule Pisces, the sign of deep-sea fishing, of diving into ocean depths others would not even dip their toe into. With the Moon as his strongest ego planet, De Quincey would have wanted the intense emotions Neptune enables. (I admit, I am biased. My mentor told me 40 years ago: “The deeper you dive, the higher you’ll fly.” My life experience has shown me, a Pisces, that he was right.)

Jupiter represents the bigger picture. Where he gives expanding, horizontal consciousness, Neptune offers sinking, vertical consciousness. By adding Neptune’s depth to Jupiter’s height and breadth, De Quincey added the fourth dimension to his consciousness. Perhaps to square the circle, as alchemists believed, to get to the philosopher’s stone.

It is noteworthy that the chart is made up of quadrilaterals, one Trapeze and two Cradle aspect figures. And even if they are replaced by other aspect figures in the House Chart, the aspect pattern is still quadrangular. Security was of great importance to De Quincey as his lifelong struggle to make ends meet attests. It was the reason for his writing, first as a journalist and then as a writer.

His motivation is also predominantly fixed, with mutability the second strongest. Thanks to his surplus of fire, he was a highly intuitive type who was also drawn to earth, the second strongest element in his nature. He describes the Welsh countryside in the first part of Confessions of an English Opium Eater quite lyrically: “No huge Babylonian centres of commerce towered into the clouds on these sweet sylvan routes: no hurricanes of haste, or fever-stricken armies of horses and flying chariots, tormented the echoes in these mountain recesses.” His love of the lake district where he would later live also reflects his earthiness.

His physical wellbeing too was a struggle. He was a “sickly and timid” child, the result, perhaps of the Saturn opposition he experienced in early childhood. Saturn is also his weakest ego planet and he would suffer physically and emotionally throughout his life.

His mother was a strong, intelligent woman who inspired more trepidation than affection in her children. De Quincey was so “brainy” that she feared he might become “big-headed” and thus took him out of the superior school he was in, and sent him to an inferior one. Perhaps she was right. His Sun is, after all, in Leo.

His father was a merchant with an interest in literature. With his Sun in a 2nd-house Leo, De Quincey’s constant fight for survival was indeed leonine. He would earn a living not through commerce, but through literature. His father died when he was eight, and a series of guardians henceforth took over the fatherly role.

Mercury, in the third house of learning, longed to have the authority of his Jupiter in the 10th house as suggested by the quincunx in the Radix. At an early age already, his intelligence had his master at Bath comment: “That boy could harangue an Athenian mob better than you or I could address an English one.” At the age of fifteen – just after the Mercury conjunction – he was reading Lyrical Ballads by Wordsworth and Coleridge, who would become close friends. Later in life, when his age point was traversing a Piscean 9th house of higher creativity, he wrote Lake Reminiscences, a series on the Lake Poets – Wordsworth, Coleridge and Southey amongst others – which, taken together, constitutes one of his most important works. He also penned biographies of poets and writers he knew, reflecting his North Node in the 7th house of personal relationships.

His knowledge was so advanced for his years, that he was ready for Oxford at age 15 when his age point was still conjoining Mercury.  He went to Manchester Grammar School so that he could obtain a scholarship to Oxford, but he absconded after nineteen months, probably during the low point of the third house: it was not the learning he wanted. To get him through his depression, he reread Wordsworth’s poetry.

When his age point was approaching the 4th house, De Quincey wanted to get away from family, particularly his guardian at that time. Not that he wasn’t aware of the possible consequences: “Even now they conscience speaks against it in sullen whispers; but at the other end of thy long life-gallery that same conscience will speak to thee in volleying thunders.” A brilliant description of the opposing energies on his Individual Axis!

He decided to run away and get to Wordsworth, but was too timid to approach the great poet. He spent July to November 1802 as a solitary tramp through Wales. His uncle gave him a guinea a week to go on his trip, but De Quincey was soon out of pocket as he didn’t inform his family of his whereabouts. He then returned to London. He couldn’t get a loan and lived on the streets till 1804 “rent-free as the rats.” According to Wikipedia, “This deprived period 1802 left a profound mark upon De Quincey’s psychology, and upon the writing he would later do; it forms a major and crucial part of the first section of the Confessions, and re-appears in various forms throughout the vast body of his lifetime literary work.”

During this time, his age point was activating Venus, that caring Cancerian energy in his life. He met a street-girl called Ann whom he saw as a sister. Despite her destitution, she cared for him when he got sick. In Confessions he writes of her with fondness and sadness, as he lost touch with her and assumed the “brutalities of ruffians had completed the ruin they had begun.” His friends discovered him by chance and De Quincey was brought home and finally allowed to go to Worcester College, Oxford.

Neptune represents dissolution, as well as creativity and Divine Love. It was at Oxford in 1804 that he first took opium to relieve his neuralgia. It is noteworthy that he now started writing – to his heart’s content, as the Neptune/Moon sextile in his Radix suggests. At the same time, his Moon is activated by the square to Mercury. Could this be what made his prose style so unusually imaginative? He was experiencing the essence of Neptune’s creative energy that would henceforth be a part of him even if opposed by Jupiter. In Confessions, he writes: “O just, subtle and all-conquering opium! that to the hearts of rich and poor alike, for the wounds that will never heal(…) bringest an assuaging balm; – eloquent opium! that with thy potent rhetoric stealest away the purposes of wrath (…) thou hast the keys of Paradise, O just, subtle, and mighty opium!”

A year later, Uranus in the hidden world of the 12th house kindled in De Quincey the internal struggle with one’s self. Perhaps this is why at Oxford “he came to be looked upon as a strange being who associated with no one.” He had been in unexpected inner worlds, to depths, physically and emotionally, few ever reached in their lives.

The major shift in 1806 suggests that opium caused his consciousness to change radically. At that time, De Quincey took opium only on Saturday evenings. Then in 1813, because of illness and the sorrow he felt at the death of Catherine, Wordsworth’s child, he started taking opium every day. His age point was at the 5th-house low point and his high opium doses continued till 1919 – the low point in the 6th house. The more opium he took, the higher his literary productiveness.

He married Marguerite Simpson in 1816 and writes with affection of how she accepted his addiction. His Venus is, after all, in caring Cancer. Imagining himself to be Orestes, he writes: “ …for thou, beloved M——, dear companion of my later years, thou wast my Electra! and neither in nobility of mind nor in long-suffering affection wouldst permit that a Grecian sister should excel an English wife.” They had eight children, of whom four survived. De Quincy had to make money for the upkeep of his family, as well as his opium habit.

In 1819, after the 6th-house low point, the Mars trine facilitated his work: he was studying German philosophers whose works he translated. The quincunx to the Sun at the same time seems to indicate a longing to increase his income and his self-worth. In 1821 he approached the London Magazine with these translations, but was persuaded to write, in serial form, about his experiences with opium. By the end of the year, the time of the Saturn conjunction in an Aquarian 7th house, the resulting articles were so well received that the first version of Confessions was published in book form. De Quincey was on his way to asserting his Jupiterian authority. Saturn, the planet that in childhood had made him timid, now turned him into a force to be reckoned with.

After the publication of Confessions and while his age point was traversing the 7th house, De Quincey made many new literary acquaintances. Richard Woodhouse wrote of the “depth and reality, as I may so call it, of his knowledge … ” The words ‘depth’ and ‘reality’ seem to point to both Neptune and Jupiter, as if De Quincey had succeeded in operating from his centre, from the point of a perfect balance of two opposing planets.

After Confessions, his authority as a writer grew continuously. One work after another was published, notably a brilliant detailed psychological analysis of Shakespearian criticism, translations of German works, a series of novels, short stories and biographies on poets he personally knew such as Coleridge (also an opium eater).

De Quincey henceforth maintained himself by contributing to various magazines. He soon exchanged London and the Lakes for Edinburgh. He spent the remainder of his life in Scotland.

By 1840 when his age point conjoined Jupiter – just before the C2 – he was one of Britain’s most prolific writers. He would soon have a huge readership in the USA. For the next century, there would be publications of his works in England, Scotland and the USA with New Essays by De Quincey appearing as late as 1966 when drug memoirs reached further heights.