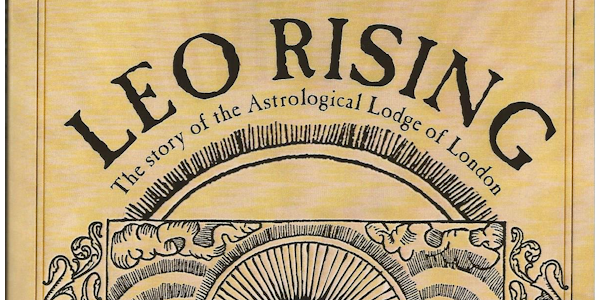 Leo Rising: The story of the Astrological Lodge of London, by Kim Farnell (Maidstone: My Spirit Books, 2015), www.astrolodge.co.uk

As many readers will know, the Astrological Lodge of London was founded by Alan Leo (1860-1917) on 13 July 1915 and held its first meeting on 13 September the same year. So, in 2015, we have been celebrating the Lodge centenary with a revival of some classic lectures during the first half of the year, reprints of articles by legendary figures in the spring/summer edition of the Astrology Quarterly, a party in the pub on 13 July, a discussion by past and present Presidents of the ALL in its various phases at the Astrological Association Conference, held over the weekend of 11-13 September, and the publication of this fascinating illustrated history by the current President, Kim Farnell.

Originally the Astrological Lodge of the Theosophical Society, it was established to unite theosophy and astrology, and Leo’s wife Bessie was its first President until she was ousted by Charles Carter (1887-1968) in 1922. Sadly, Leo died in 1917 in the early days of the Lodge.

It is amazing to read of how many astrology classes were available to people living in London during the first half of the twentieth century, and that, as early as 1920, the clamour was for more astrology and less theosophy. Carter, with Margaret Hone (1892-1969), would eventually found the Faculty of Astrological Studies in 1948. Despite ongoing controversies between astrologers who were theosophists and those who were not, which led to the founding of the Astrological Association in 1958, the ALL did not divorce itself from the TS until the 1980s. By this time it had taken an entirely different direction from the psychosynthesizing and theosophical intentions of its founding members. As Kim puts it in her inimitable style:

Modern astrology was becoming more closely aligned with psychology—the 1960s assumption that we were entering the New Age meant that many astrologers, though fewer at the Lodge, thought we needed new astrology, modern astrology. (p. 104)

Turning its back on the marriage of astrology and psychology, the Lodge became central to the revival of traditional techniques, bringing the original edition of William Lilly’s Christian Astrology back into print and fostering Olivia Barclay’s course in horary astrology—apparently a useful technique for finding lost cats!

Thankfully, the Lodge’s antagonism towards psychological astrology is a thing of the past and I was given a couple of slots in the summer programme to talk about Alan Leo’s contribution to astrological psychology, which I mention in my own book, Astrological Psychology, Western Esotericism, and the Transpersonal. In his foreword to Kim’s book, Nick Campion refers to the craft of astrology as ‘a central feature of modern esotericism’.

Leo Rising charts the survival of an astrological society over a hundred years through its ups and downs, and many phases. It is well researched, referenced and indexed, liberally illustrated with black-and-white photographs of key characters in the Lodge’s history, and spiced with a few anecdotes. This largely factual account provides an excellent record of events and brings to life the protagonists and their foibles. Charles Carter clearly did not like Bessie Leo, but Kim thinks his opinion might not be entirely accurate, so there may be an alternative story to tell and another book to write. There are amusing descriptions of the many eccentric astrologers of the 1930s, all of them opinionated and argumentative. This book is a very readable and informative companion for the student of astrology, an illustrated ‘who’s who’ over a century of astrology in London.

Nowadays the ALL meets once again on Monday evenings at the London headquarters of the TS although it has a separate constitution. Keeping up the tradition of controversy, in the September/October edition of the Astrological Journal, Nicholas Kollerstrom questioned whether the ALL should in fact be celebrating its centenary, given the changes in constitution that had taken place in 1982, but his opinion was soundly rebuffed by several past Presidents at the AA Conference. As stated on the back of the book jacket:

The Astrological Lodge of London has now been meeting for one hundred years. We plan to continue meeting for at least the next hundred.