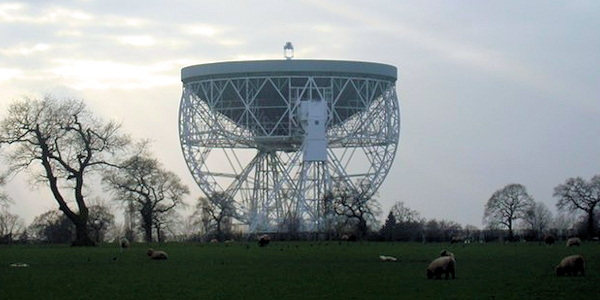 I wrote this post on my astrological psychology blog in August 2007, when the famous telescope was celebrating its half-century. On 7th July 2019 it was awarded UNESCO World Heritage Status, and it’s worth revisiting what I wrote in the context of this significant award, setting in alongside the chart image for the telescope and it’s current Age Point, which is in Virgo in the 11th House and close to the Balance Point, having traversed Mars, Pluto, Mercury and Venus in the large stellium.

What I like about the chart is the positioning of Jupiter at the apex of the Ear/Eye figure. It reminds me of the antenna at the centre of the telescope’s disc. Admittedly, with no definite time to set the chart up for, small planetary movements may alter this aspect pattern, but I suspect maybe not as the Ear/Eye is pinned by Pluto, Neptune and Jupiter – all slower moving planets. Jupiter at the apex seems so apt – an expansion of horizons, experiences, knowledge, wisdom – just play about with the ideas for yourself.

Sun conjunct Uranus in Leo is another powerful symbol too, of science and fame. The telescope is world famous!

Over the next few days, Jodrell Bank Observatory in Cheshire is celebrating 50 years of the Lovell Radio Telescope. It’s creator, Sir Bernard Lovell, now in his 90’s, will be giving a public talk at the Observatory as part of the celebrations.

When I learned that the famous radio dish received its first space signals from the Andromeda Galaxy, on 2nd August 1957, I thought I’d set up the chart (time as noon, location Goostrey, Cheshire) just to see what it looked like.

Take a look at that chart alongside the photo of the telescope. It’s oriented this way because of the time I set it up for, but with a different time the whole chart structure would move around – just as the telescope does when it’s tracking signals from space. The chart image bears an uncanny resemblance to the telescope itself.

There are two interesting and relevant aspect patterns too. The blue/green Ear/Eye Information triangle is one of them. This figure picks up and stores information and messages of all kinds. The other is the Shield, a quadrangular figure. The Hubers say in Aspect Pattern Astrology that this figure is relatively rare and has high absorption power; appropriate then for the chart of the first signals received from space by the telescope.

The radio telescope itself is an impressive sight, and can be glimpsed unexpectedly from different parts of the surrounding countryside. It was used to dramatic effect in an episode of “Dr. Who” when there was a nail-biting showdown between the Doctor and the Master who were battling it out high above the ground on the structure of the telescope.

Featured image of the Jodrell Bank Radiotelescope by fitzyt via Wikimedia Commons.