How did you get into Esotericism? 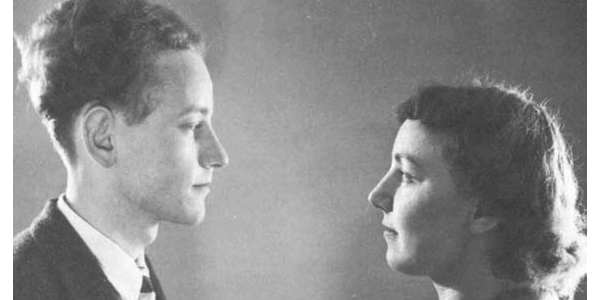 Extract from an interview Louise Huber gave to Verena Bachmann in 2003, first published in German in ‘Astrologie Heute’, recently translated into English by Sue Lewis.

Louise Huber as a young woman

VB: How did you get into esotericism?

LH: As a result of the Second World War. I suffered four years of war. Initially I wanted to study sports, then everyone was conscripted. First I was in the social service, later serving in the war effort, obliged to work for the Luftwaffe. I was there until the end, when the English made me a prisoner. Then, seeing how the ideology of the Third Reich had failed, I looked deeply into the meaning of life and the essence of being human.

VB: Everything was literally destroyed.

LH: Yes, and that stimulated my approach spiritual questions. I was then living in Stuttgart, married to my first husband, who was interested in spiritual matters and vegetarianism, trying to purify body and soul. In those days, the spiritual elite of Germany lived in Stuttgart, and I was able to attend many conferences.

LH: Yes, once those ideals had collapsed, there arose a thirst for spiritual answers, questions about existence, new ideals. For five years, I attended a conference nearly every day, which was amazing. In this way, I connected with astrology, the Arcane School of Alice Bailey, and other spiritual trends. I was in the circle of Karlfried Graf Dürckheim, to which Dr Endres and other personalities belonged.

VB: And what happened at the end of those five years?

LH: After all I had heard, I had a head full of ideals… and then Bruno arrived.

LH: He knocked at my door. Meeting with Bruno was the most important turning point of my life.

VB: You were already married?

VB: And how did things go between you and Bruno?

LH: Bruno stayed at my house for three weeks. We understood each other incredibly well. I shared with him everything I had in my head, transmitted all the knowledge I had accumulated. And he was astoundingly open and receptive. His mother had been a Rosicrucian and student of the Arcane School, and had tried without success to convert him to the spiritual path… which he only came to accept through me.

VB: You were more convincing?

LH: At that moment I still didn’t know but, before then, Bruno had opposed everything esoteric and for a time he had even been an atheist. I didn’t know that until some while after. In this opening encounter, Bruno appeared to be for everything esoteric, which was for me an important anchor that united us and convinced me that I should agree to have a relationship with him.

VB: You opened the door to the esoteric world to him… And what did he give you?

LH: He gave me orientation… his sharp intellect gave him a great capacity for differentiation, and this enabled me to order my burgeoning esoteric knowledge.

VB: In your horoscope, Venus is very close to Pluto, and Saturn is in house 7. This makes me think that for you the partnership had an obligatory character.

LH: What do you mean by obligatory character?

VB: I refer to commitment…

LH: I prefer that… I am very full-on. When I recognize my task, I give myself to it body and soul. The meeting and spiritual exchange with Bruno signalled joint work.

VB: You saw that clearly from the beginning?

LH: Yes. Six months before I had a vision in my meditation. I saw myself seated in a class, and two rows ahead was a young man who turned round and looked me in the eyes. When, half a year later, Bruno was standing in the porch of my house, I knew he was the man of my vision. For me, our encounter was an experience of déjà-vu. Incredible!

The full interview will be in the forthcoming issue of Conjunction, available to APA members.