Gifts for Mankind. Venus in all her Splendour, from Klimt. 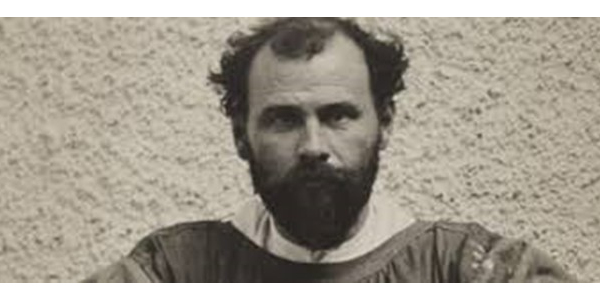 Gustav Klimt, an Austrian symbolist painter, is not only known for his paintings, but also for his murals, sketches and other objets d’art.

“Whoever wants to know something about me – as an artist, the only notable thing – ought to look carefully at my pictures and try to see in them what I am and what I want to do.”

In this article, I look at how his chart reflects his art, based on the planetary energies in their respective signs. There is no birth time, so I have set his chart at 12pm. Klimt was born in Baumgarten, Austria on 14 July, 1862.

Mars is side by side with Neptune, the energy of creativity. From an early age, Klimt (and his younger brothers, Ernst and Georg) showed an enterprising artistic talent. This was while his Age Point was moving through the 2nd house of possessions. And indeed, art would become his most highly valued possession, the one that a decade later would fetch the highest price.

Although his family was poverty-stricken, his learning in art started – while his Age Point was progressing through the 3rd house – when he attended the Vienna school of applied arts and crafts (now the University of Applied Arts Vienna) from the age of 14 to 21. His studies focused on architectural painting.

His Mars in Aries made him an enterprising young man. In 1877, aged only 15, Klimt and his brother Ernst and his friend Franz Matsch began working together. By 1880 at the end of the 3rd house, this “Company of Artists” had received numerous commissions.  Klimt’s  professional career started with the painting of interior murals and ceilings in large public buildings on the famous Ringstraße (Circle Street) in Vienna.

At the age of only 26 in 1888, Klimt received the Golden Order of Merit from Emperor Franz Josef I of Austria for his contributions to murals painted in the Burgtheater in Vienna.

He was not only a founding member, but also president of the Vienna Secession movement  and its periodical, “Sacred Spring”. This movement in art show-cased the work of members and provided exhibitions for unconventional young artists, as well as brought the works of the best foreign artists to Vienna. The government supported their efforts by giving them a lease on public land to erect an exhibition hall.

In addition to too many red aspects in his chart, there was a constant energy exchange in Klimt’s consciousness between the above two planets and Mercury. His creative learning would continue throughout his life, with him painting murals and canvases that constantly incorporated new art techniques.

Both these planets are in Virgo, the 6th- house sign of fastidious work. Saturn might have been comfortable being so close to Jupiter, constantly keeping an eye on Klimt’s work, but Jupiter’s sense of adventure lay in Klimt’s art.

His North Node is in Sagittarius, suggesting that his adventurous path in art, discovering ever new techniques, was the right way for him to go.

He never travelled much, but when he went to Ravenna and Venice in Italy and saw the magnificent mosaics there, as well as the Byzantine architecture, he subsequently incorporated these into his paintings. It was painstaking work, but Klimt usually only completed his canvases for wealthy patrons over a year. Saturn would have been proud of him!

Klimt loved women. In the same above-mentioned book on Klimt, a certain Emil Pirchan states in the chapter entitled Klimt, the Man:

“With Confucius, Klimt maintained that woman is the major creation.” He saw them as caryatids that carried his great art on their shoulders. “They were his greatest inspiration: he required their flattering atmosphere in order to achieve his passionately aroused creations.”

With Venus as the goddess of Beauty, walking hand in hand with Uranus, Klimt constantly came up with his innovative aesthetics to reveal Venus in all her magnificence. Not that Klimt ever walked hand in hand with Venus down the aisle!

When he was 30, both his father and brother died, and he was now financially responsible for a family of more than ten! He lived with them for the rest of his life. To me, it’s understandable that he didn’t want to get married and create more children. He wanted to create more art.

On a mundane level, the Venus in his life came in the form of his models with whom he slept – like other artists at the beginning of the 20th century. He thus left a legacy of 14 illegitimate children. Emilie Flöge, an Austrian fashion designer and the wife of his deceased brother, was the only lifelong female friend with whom he shared his sense of aesthetics as expressed in their great love for fabrics. Klimt designed many of the costumes which Emilie then produced and modelled in his works.

From the late 1890s onwards, Klimt spent his annual summer holidays with the Flöge family on the shores of the Attersee and painted many of his landscapes there. Landscape paintings constitute the only genre other than figure painting that seriously interested Klimt.

Klimt did however achieve a new success with the paintings of his ‘golden phase’ (after the Great Hall debacle) influenced by Byzantine and Japanese art and the use of gold leaf. His Venus thus became ever more luminescent. This resulted in the following painting of Adele Bloch-Bauer which, in 2006, was purchased for US $135 million, thus not only surpassing Picasso’s Boy With a Pipe (sold for $104 million), but is also the highest price ever paid for a painting.

Not too high a price to pay for Venus in all her Splendour, and that is what we’ll remember Klimt by.