Gifts for Mankind. Venus at her Most Fashionable – from Yves Saint Laurent. 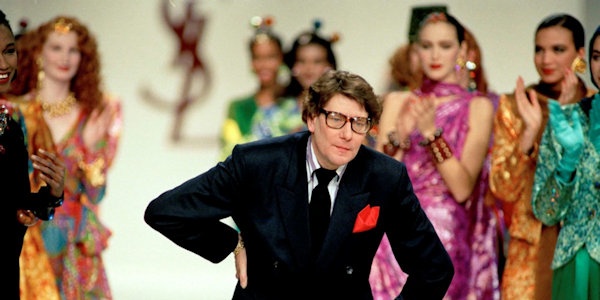 I recently watched a documentary on Yves Saint Laurent and wondered why he seemed ‘not present’. Surely the French fashion designer who is regarded as being among the foremost fashion designers of the twentieth century should not be so ‘absent’ when his models are on the catwalk?

Then I discovered that he abused both alcohol and cocaine which explained his reluctance to be present in his reality.  Cocaine is known as the confidence drug, but he wasn’t confident at all. To me, he seemed shy. Towards the end of the documentary, he answers his interviewer’s question about his greatest strength:”The will to do it.” And his greatest weakness: “Timidity” (which doesn’t mean he didn’t often lose his temper!) Why so shy? It is this question in my mind which underlies my article. Could something in his chart explain this withdrawal into himself?

The opposition between Mars conjunct Pluto and the Moon – his strongest ego planet – explains his ‘absence’ to me. It seems the groundbreaking transformations the man in him had to deliver in his work were opposed by his emotional ego. So he was either fighting his battles on the work front – he has five planets in the 6th house – or withdrawing into his emotional inner world, aided and abetted by alcohol and drugs.

These opposing energies form the basis of an Ambivalence Triangle in his Radix, where he could have relieved the pressure of creating fashions for the female body as suggested by Saturn in Pisces at the blue angle. But their energy in the House chart is spewed out, like a volcanic eruption, in Uranus on the cusp of the 3rd house of learning, in a newly formed Achievement Triangle.

He simply had to learn more and yet more about innovative designs, becoming the leading figure in fashion after the death of Christian Dior who had taught him so much. “Dior fascinated me,” Saint-Laurent later recalled. “I couldn’t speak in front of him. (Too shy again?)  He taught me the basis of my art.” Under Dior’s tutelage, Saint Laurent’s style continued to develop and become ever more noticed. In 1957, after Dior had died of a massive heart attack, Aged only 21 when his Age Point facilitated further learning of female fashions and aesthetics, as suggested by the sextlles it formed with Venus conjunct Mercury, he now took over Dior’s legacy.

There are fewer red and more blue aspects in the House Chart than in the Radix, implying that by nature, Saint Laurent preferred to relax, but his environment demanded that he be constantly active.

The colour ratio in the Radix is better balanced in the House chart with four red aspects rather than three – including a second opposition – and three blue aspects rather than five. Think of all the energy necessary to design, every year, 75 new outfits for Spring and Fall. Being the leading fashion designer in the Seventies and Eighties when Haute Couture ruled the roost must have been exhausting!

Fortunately there was too much fire in his temperament (-30), so he had more than enough intuition and inspiration to keep on coming up with new designs.

As the pressure of his work increased, he flared up more and more until eventually he was burnt out.

But what his heart desired, as indicated by the Moon on the threshold of the 12th house, was to cross it into the hidden world. There he could better contain the flood of emotions in his temperament (-8).

The opposition in the House chart between Saturn in Pisces in the 1st house and Neptune in Virgo in the 7th house could also be what caused unease in Saint Laurent. At only six years old, Saint Laurent liked to create intricate paper dolls – a good reflection of his experience of creative Pisces, the sign his Age Point was wading through at the time. By his early teens, perhaps at the AP/Uranus conjunction when he was 12, his innovation in creative fashions revealed itself in the dresses he was designing for his mother and two younger sisters in their villa on the Algerian Mediterranean. In other words, he was having fun.

36 years later, when his consciousness was filled with his creativity thanks to the Age Point/Neptune conjunction, all the fun had gone out of his life.  Having to create 75 new designs for the Spring and Fall collections for Haute Couture, as well as 75 for his ready-to-wear lines, took its toll on him.

The business aspect of these flourishing fashions had been left to his close, personal partner, Pierre Bergé, who in the aforementioned documentary says: “I am a businessman because I was obliged to become a businessman,” implying that Saint Laurent was none of the sort. After a 16-year relationship, the couple split romantically in 1976 – at the low-point of the 7th house – but remained business partners till Saint Laurent’s death.

A couple of months before this low-point, Saint Laurent’s consciousness was filled with Neptune. Neptune is opposed by Saturn in Pisces in the House Chart, as if the creative couture of Saturn in Pisces was opposing his real creativity. He certainly brought fashion closer to art than any other designer. Think of the graphic designs in his famous 1965 Mondrian Collection (on the right).

But Neptune as ruler of the 12th house is also the energy of dissolution. It seems Saint Laurent was either engaged in creating fashions or becoming ever more dissipated, in short, losing it. Could alcohol and drugs have been the cause of the split? Only his partner would know.

At the age of 17, while his Age Point was progressing through the 3rd house of learning, Saint Laurent moved to Paris and enrolled at the council regulating the haute couture industry where his designs quickly stood out, much like his Jupiter in the 10th house in Sagittarius does.

In 1953 Saint Laurent won first place in a contest for young fashion designers and was thus invited to attend the awards ceremony held in Paris in December of the same year. There he met the then editor of the Vogue magazine, who was so impressed by Saint Laurent’s sketches that he suggested he should become a fashion designer. This was during the AP/North Node  quincunx which reflects Saint Laurent’s big learning step in the world of Haute Couture. The editor immediately recognised his talent and sent him to Dior, who hired him on the spot.

His spring 1958 collection saved the Dior enterprise from financial ruin, but his fall 1958 collection – at the time of the low-point in the 4th house – was a disaster. His hobble skirts and beatnik fashions were torn to shreds by the press.

In 1960, Saint Laurent was conscripted to serve in the French Army during the Algerian War of Independence. He was in the military for only 20 days before the ragging and bullying  by fellow soldiers (What? A Fashion Designer!) caused such stress in him that he was admitted to a military hospital, where he received news that Dior had fired him.  Off course, this worsened his condition, so that large doses of sedatives and psychoactive drugs, including electroshock therapy, became necessary. Saint Laurent himself traced the origin of both his mental problems and his drug addictions to this time in hospital.

I can only imagine the immense distress at having to fight a war when his consciousness was filled with the idea of creative self-expression as suggested by his Age Point on the cusp of the 5th house. After his release from the hospital late 1960, Saint Laurent sued Dior for breach of contract and won. He and Bergé, started their own fashion house Yves Saint Laurent – YSL – with funds from an American millionaire.

The Height of Success

In the 1960s and 1970s, Saint Laurent – now part of the “jet set” in Paris and New York – popularised fashion trends such as the beatnik look, safari jackets, tight trousers and tall, thigh-high boots.

In 1965, his Age Point made Venus conjunct Mercury in Leo aware of parading the catwalk or, dare I say, the big cat walk. At the AP/Mars conjunction, he designed his most famous classic tuxedo suit for women in 1966, “Le Smoking”, in addition to elegant trouser suits.

It was after all the time of feminism and Saint Laurent showed women how to look more assertive and more elegant.

In 1983, during the AP/North Node sextile, Saint Laurent became the first living fashion designer to be honoured by the Metropolitan Museum of Art with a solo exhibition. However, Saint Laurent, whose health had been precarious for years, became erratic under the pressure of designing two haute couture and two prêt-à-porter collections every year. He increasingly turned to alcohol and drugs. At some shows, he could barely walk down the runway at the end of the show.

In 2001, a couple of years before he retired, he was awarded the rank of Commander of the Légion d’Honneur by French President Jacques Chirac. When he was not actively supervising the preparation of a collection, he was spending more time at his villa in Marrakech, Morocco. Only after his retirement in 2003 – when his Age Point was in the Being quadrant – could he finally be what he really was: a recluse.

Where his North Node is unaspected in the Radix, it is at the top of the Dominant Triangle in the 11th house of like-minded designers. This triangle certainly gave Saint Laurent a dominant presence in the world of fashion.  Even after his death at the age of 72, he was in 2009 still the top-earning dead celebrity according to Forbes.