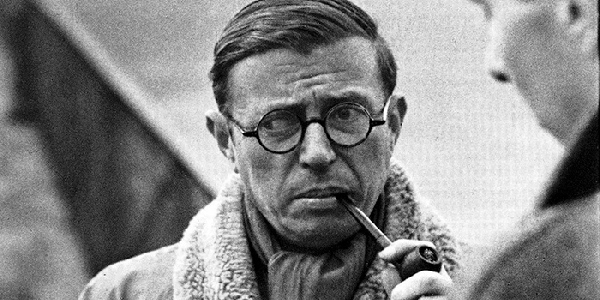 Jean-Paul Sartre was a French philosopher, playwright, novelist, screenwriter, political activist, biographer and literary critic. He was one of the key figures in the philosophy of Existentialism.

After WW2, he became a leading figure in 20th-century French philosophy and Marxism. His work has also influenced sociology, critical theory, post-colonial theory and literary studies. To this day, his influence in these disciplines continues.

Sartre was also noted for his open relationship with Simone de Beauvoir (also on the blog) Together, Sartre and De Beauvoir challenged the cultural and social expectations of the bourgeois society, both in lifestyle and thought.

The chart resembles an envelope which covers up the inner tension of the two oppositions in the Righteousness Rectangle. From the outside, Sartre appeared to be relaxed, but on the inside war was waging between Saturn and his North Node, as if the Great Teacher constantly questioned the path he was following as indicated by the North Node in the 9th house. He first had to do his homework before he could reach the heights required by the bigger picture.

The Moon and Saturn are in an Aquarian and Piscean 3rd house respectively, like that of two other philosophers, Nietzsche and Simone de Beauvoir (both on the blog). The Moon is Sartre’s strongest personal planet, followed by Saturn, suggesting that acquiring ever more knowledge and being creative were his ego’s greatest tasks.

The only tension visible to the outer world came from the opposition between Mars in a Scorpionic 11th house and Venus in a Taurean 5th house. The man in Sartre opposed the aesthetic values of the comfort-loving bourgeois. Often he had to defend his philosophical arguments countered by Venus, often in the form of De Beauvoir. With too much earth in both their temperaments, they could deal with an earthbound Venus and would go on long walks – and talks – in various parts of the French countryside. There is far too much water (-27) in Sartre’s temperament and too much fire in De Beauvoir’s, so walking and talking could have been their way of letting off a lot of steam.

Otherwise, his opposed Mars had a way out via the trine to Neptune, where all the water in him suited Cancer and he could indulge his creativity.

He was the only child of an officer of the French Navy, and a mother related to Nobel Prize laureate Albert Schweitzer. His father died when he was only two. His mother moved back to her father who helped her with Sartre’s upbringing. He was a teacher of German who taught Sartre mathematics and introduced him to classical literature at a very early age. When he was twelve, Sartre’s mother remarried, and the family moved to La Rochelle, where he was frequently bullied, in part due to his wandering blind right eye.

In 1920, at age 15, when his Age Point had just met up with Saturn in the 3rd house of learning, the Great Teacher introduced him to philosophy when he read an essay by the philosopher Henri Bergson. Sartre attended a private school in Paris where he got his certificates in psychology, history of philosophy, logic, general philosophy, ethics and sociology, as well as physics. He then completed his MA thesis in Paris at an institution of higher education that was the alma mater for several prominent French intellectuals.

Like Nietzsche (also on the blog) and De Beauvoir, his 3rd house is coloured by Aquarius and Pisces, which explains his attraction to philosophy and literature. In 1929 he met Simone de Beauvoir who studied at the Sorbonne and later went on to become a noted philosopher, writer and feminist.

It is noteworthy that both in the case of Sartre and De Beauvoir, the major shift in their consciousness occurred in 1929. They became inseparable and had a (not monogamous) relationship of over half a century. When they wrote their final (agrégation) exams they virtually vied for first place. But Mars would put Venus in her place: second, with him first.

During WW2, when his Age Point was marching through the 6th house of work, he was drafted into the French Army from 1939 to 1941 and served as a meteorologist. Needless to say, this affected his real work, his thinking and writing, as implied by the 6th house low point in 1939.  He was captured by German troops in 1940 and spent nine months as a prisoner of war.

This confinement gave him the opportunity to read another influential philosopher (Heidegger) and to write his first drama. Because of his poor eyesight which affected his balance, he was released in 1941 and had Venus – or Simone – on his mind, as implied by the AP/Venus semi-sextile. Given civilian status, he could teach again.

From 1931 until 1945, the war years excluded, Sartre taught at various lycées in France. This includes his teaching in Berlin where he studied the work of a prominent German philosopher (Husserl). Then the revival of the German Idealist philosopher (Hegel) also influenced him, as it did a whole generation of French intellectuals. .

When his Age Point was traversing the Collective sphere – before WW2 – he (and Simone) believed in individualism, the theme of the upper hemisphere. But after the war, he became committed to the collective with his political activism. Perhaps it was his essay, Paris under the Occupation, that made him aware of the passivity of the French in the hands of the Wehrmacht. He believed the passivity of most French contributed to the establishing of ‘The New Order in Europe.’ No-one seemed to stand up for his or her. beliefs. Even intellectuals at the Café de Flore feared speaking their truths, in case an informer was eavesdropping. (Some philosophers criticised his lack of political commitment during the German occupation.)

His Age Point was now in the 7th house where there is a gathering of four planets: Pluto, the Sun and Mercury in Gemini and the already mentioned Neptune in Cancer. The Pluto in him transformed the (bourgeois) idea of close personal relationships to become not love and marriage, but close intellectual relationships.

He consequently founded the underground group, Socialism and Liberty, with other intellectuals, including De Beauvoir, in 1941. Sartre and De Beauvoir sought the support of two great French thinkers and writers, André Gide and André Malraux., but both were undecided about Socialism which discouraged Sartre. The group was soon dissolved and Sartre decided to focus on his writing rather than active resistance.

He then wrote the works he is best known for today: Being and Nothingness, The Flies and No Exit. Fortunately, the German occupiers did not censor these works. Being and Nothingness was published in 1943, the same year his Age Point was face to face with Pluto. He had indeed refined his mind – the Sun – and his learning – Mercury – as implied by the conjunction linking Pluto with the latter two planets.

Being and Nothingness would become the work on Existentialism, certainly the most clear on applying one’s will to create one’s life. Now that Nietzsche (who died a few years before Sartre was born) had announced that ‘God is dead’, it was up to every human to create his own life by applying his right will. This places an enormous responsibility on the shoulders of the individual to create his or her own life, by acting in good faith – bonne foi – or bad faith – mauvaise foi. (Right Will and Right Action are two of the 8 tenets of Buddhism which also does not believe in a God.)

It is noteworthy that the Age Progression in Sartre’s chart reflects his existentialist philosophy perfectly. He believed that ‘existence’ precedes ‘essence’ as opposed to other philosophers who put essence first. His Age Point Progression underpins this existentialist philosophy: he first had to experience his life – existence – before he could get to the meaning of his life – the essence.

He first had to experience all his planetary energies – excluding Mars, the experience of which came in the already mentioned opposition from Venus – before he could get to the bigger picture of the 9th house, where his North Node beckons to him from an ever greater height. He certainly followed his path with heart, or rather, his path of ‘good faith’.

Sartre’s Saturn lies in an intercepted sign (Pisces) but had a way out via the trine to Neptune on the 8th house cusp. He certainly paid his dues to mankind with his existentialist philosophy and plays. His play The Flies explores the key existentialist themes of freedom and responsibility, while No Exit has three people in the afterlife, in a locked room for eternity. At first, they are reluctant to reveal why they are being punished, but as the play proceeds, we hear of their sins. It ends with the famous words: “Hell is other people.” It is hell to be seen from the view of another consciousness. (I hope my article isn’t hell for Sartre.)

With his Age Point traversing the 8th house, he produced most of his subsequent work. He also paid his dues by his political activism, as did his consort, De Beauvoir. His great trilogy of novels, The Roads to Freedom, was written between 1945 and 1949. If the first period of his career was defined mainly by Being and Nothingness, the second period focussed on the split into communist and capitalist blocs. Though he embraced Marxism, he was not a Communist.

Like Nietzsche and De Beauvoir, Sartre’s thought had a major impact on human consciousness in the late twentieth century. The subsequent development of the concept of man’s will, his and her right to choose his and her life and freedom (the Hippies in the Sixties, feminists of the Seventies), equality of races, the approaching Aquarian Age with its consciousness of a Higher Self, rather than a God, to obey. I believe they reached the peaks of human consciousness as we know it.

In the new millennium, data rather than experience, has already taken over. Will the gathering of data, of unimaginable amounts of data, lead to a new being as the currently much read Israeli historian, Yuval Noah Harari, predicts? And what will this new being be without its essence, its soul and spirit? Or will data eventually be able to create the essence, the soul and spirit in human consciousness. Will psychology eventually become datalogy?