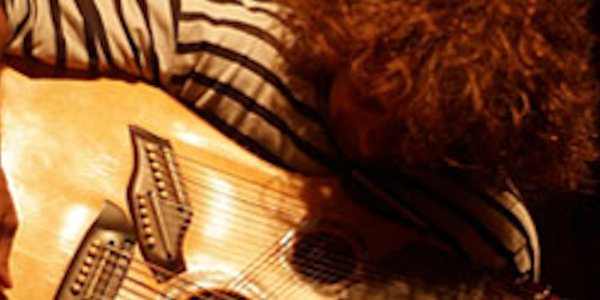 This genius of jazz has won no fewer than 20 Grammy Awards for his magnificent music. In the same way Mozart was a prodigy of the piano, Pat Metheny is of the electric guitar. He was one of the first to play the electric twelve-string guitar in jazz. His work includes compositions for solo guitar, small ensembles, electric and acoustic instruments, large orchestras and ballet pieces.

Born in Lee Summit, Missouri on 12th August, 1954. There is no correct birth time, so I’ve set it at midday.

As empty as one half of his chart is, so spacious is the sense created (in me) by his music. The oppositions and quincunxes running through his core resemble the strings of the different acoustic guitars played by Metheny over the years – the custom-made 42-string Pikasso, the mini guitar, the acoustic sitar guitar and the baritone guitar.

With the oppositions running through his core, his music moves from harmony to discord, from chaos and then back again to order (and on to a higher order), as if his consciousness is constantly pulled this way and that. In addition, his Mercury is unaspected and consequently runs wild, particularly in the fusion genre, which at times, is too frenzied (to my ear).

The Lion of Sound

The first thing that struck me when I went to his concert was his massive mane of hair and, indeed, his Sun is in Leo. Despite his leonine qualities, he keeps a very low profile. Most people haven’t heard of him, although he has won all those Grammies.

Also in Leo are Mercury and Pluto. These planetary energies are reflected in the constant creative expression of Metheny. Throughout his career, Pluto has enabled him to transform the genre by utilising new technology and constantly working to evolve the sonic potential of his electric guitar. His versatility on any instrument is without peer. Not surprisingly, he is the only musician ever to win all those Grammies in 12 different categories. His discography totals a staggering 50 albums to date.

His North Node and his Moon are in the same sign – Capricorn – which suggests following his path with heart – towards ever higher peaks of music – was the right way for his soul’s journey in this lifetime. In addition to all his compositions, he would become a musical pioneer in the realm of electronic music. He was one of the first jazz musicians to use the guitar synthesiser to create the sound of other instruments such as a trumpet or a piano accordion (synclavier). He has also been instrumental in the development of several new kinds of guitars, taking instrument development to new heights.

Where it all started.

Metheny’s first instrument was the trumpet, which he was taught – at age eight – by his brother, Mike, now a jazz flugel hornist. His brother, father and grandfather often played trios together at home.

At age eleven, just before his Age Point left the 2nd house of possessions behind, he saw the Beatles on TV and experienced the exciting journeys a guitar could take him on. Later he would state that the Beatles, Miles Davis and Wes Montgomery had the biggest impact on his music.

His parents were fans of Glenn Miller and swing music. They regularly took him to concerts, but had little respect for the guitar, as if disrespecting their child’s emotional ego – his Moon. They finally gave in to Metheny’s wishes and let him buy a guitar for his 12th birthday. It was the instrument that would became his most valuable possession.

While his Age Point was traversing the 3rd house of learning, Metheny (aged 15) won a scholarship from Down Beat magazine to a one-week jazz camp where he was mentored by guitarist Attila Zoller, who then invited him to New York City to see other great guitarists. During this time, he was playing at a club in Kansas City with some of the best jazz musicians.

He was then approached by a dean at the University of Miami and offered a scholarship at age 18. But after less than a week, Metheny realised that his learning was not of the conventional kind as suggested by the 4th house. He admitted to the dean that playing guitar all day during his teens had left him unprepared for classes. The dean then offered him the job of presenting the recently introduced electric guitar course. He was the youngest teacher ever at the university.

At age 19 when his consciousness was moving through the 4th house, he moved to Boston to teach at the Berkley College of Music, once again the youngest teacher there. Soon he had the reputation of being a prodigy. His teaching would continue throughout his life and he would later present music workshops all over the world, from the Dutch Royal Conservatory and the Thelonius Monk Institute of Jazz to clinics in Asia and South America. In addition, he dedicates time to the projects of emerging artists.

Metheny released his debut album in 1976 when he was 22. Two years later, three other musicians joined him and the Pat Metheny Group – a quartet – was established in 1978 and celebrated with an album by the same name. His Age Point was now on the cusp of the 5th house, the area in which he could express his creativity in music. The second Group album soon reached number 1 on the Billboard Jazz chart in 1978.

With his Age Point entering the 6th house of work in 1984, his service to others came in the form of several albums. He lived in Brazil from the late 1980s to the early 1990s and played with Tom Jobim – the master of Brazilian jazz (of Girl from Ipanema fame) who had a great influence on his music. But after the low point of the 6th house, he felt his music needed to take a different direction.

From the mid 90s his music thus started moving away from the Latin style which had dominated the releases of the previous ten years. He certainly got the bigger picture of the 9th house which resulted in albums that now included experiments with sequenced synthetic drums on one track, free-form improvisation on acoustic instruments, and symphonic signatures, blues and sonata schemes. He has spent most of his life on tour, averaging between 120 – 240 shows a year since 1974!

In 2018, at the age of 64, when his Age Point was traversing the 11th house of like-minded (or rather, like-eared) people, he was honoured with the Lifetime Achievement Award (JazzFM), and elected into the Royal Swedish Academy of Music. Yet this lion of sound doesn’t sit on his laurels as he stated in his keynote speech at the Society for Neuroscience conference, “I can’t say I am 100% there, but by really trying to make sense of the process (improvisation), I am more consistently able to … increase my chances of being able to improvise at the level that I aspire towards.”

I recently looked what the name is of track 2 on his Offramp album, which hooked this fish when she was 33, exactly 36 years ago. It’s called “Are you going with me?” To which I’d like to answer: “Yes, I have been and still am going with you.”

Of all the music I’ve heard over the past half century,be it classical or jazz, that of Pat Metheny has taken and still takes me on the most magnificent musical journeys, not just to Above the Tree Tops and Beyond the Missouri Sky, but to a higher realm still. How I wish I had his correct birth time to perhaps see what underlies his ineffable genius!

PS See and hear him on YouTube, particularly Moon Song and Minuano.