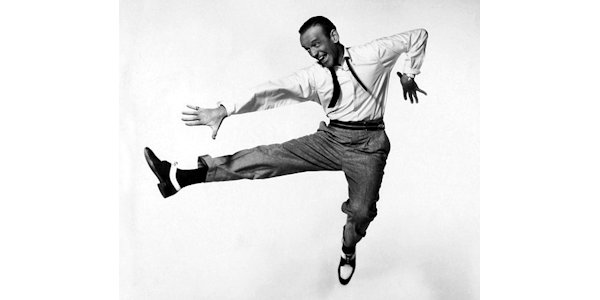 This post is from Joyce’s blog, a chart interpretation and edited extract from her book “Using Age Progression”

Fred Astaire was born Frederick Austerlitz on 10.5.1899 at 21.16 local time in Omaha, Nebraska USA, the son of an American born mother and an Austrian father. His chart reminds me of a see-saw or swing boat seeking to achieve balance; it’s not quite there but it’s not far off either. I also see what could be a Kite configuration spanning the horizontal axis of the chart, but it’s not complete and gives the impression that everything is still docking into the right position to complete this figure, and once again, it’s not quite there yet. One significant thing that Astaire was renowned for was his never-ending quest for perfectionism in his choreography and dance routines.

Fred Astaire was born Frederick Austerlitz on 10.5.1899 at 21.16 local time in Omaha, Nebraska USA, the son of an American born mother and an Austrian father. His chart reminds me of a see-saw or swing boat seeking to achieve balance; it’s not quite there but it’s not far off either. I also see what could be a Kite configuration spanning the horizontal axis of the chart, but it’s not complete and gives the impression that everything is still docking into the right position to complete this figure, and once again, it’s not quite there yet. One significant thing that Astaire was renowned for was his never-ending quest for perfectionism in his choreography and dance routines.

The aspect structure, on initial inspection, appears to be composed of quadrangular figures, but a closer and more detailed look reveals that this is an illusion as there are interlocked triangular figures along with several linear aspects. The shaping of the overall aspect structure gives information about the person’s inner motivation and what drives them; Astaire’s looks quadrangular, which would make him Fixed/security-oriented, but in fact there is a mixture of Mutable (triangular) figures and Cardinal (linear) aspects. This indicates a flexible and fluid approach to life, being able to move on with changes and go with the flow, but at the same time there is an underlying push of restlessness and determination which comes from the cardinality of the linear aspects.

The direction of the aspect structure is horizontal, with the rickety and incomplete Kite tipped over from an upright position, as in the diagram, and seen sideways in the chart, flying towards the “You” side.

This is emphasised by the Moon/Pluto conjunction straddling the descendant and the presence of Neptune in the 7th house. In spite of his Sagittarian ascendant, with planets in this Sign adding emphasis, it is often planets on or around the DC which are picked up first and foremost by the environment as these are what others first encounter.

Moon in Gemini is easy to see in Astaire’s slim and lightweight frame and his smoothly shaven face. His looks were quirky and unconventional, but his charm and pulling power are undeniable; a combination of Moon conjunct Pluto and opposite Uranus, with the 7th house Neptune standing nearby like an overseer. After a Hollywood screen test, producer David Selznick wrote of Astaire:

“I am uncertain about the man, but I feel, in spite of his enormous ears and bad chin line, that his charm is so tremendous that it comes through even on this wretched test”!

Aspect Patterns: The rickety Kite and the need for perfection

Astaire’s Kite is incomplete and in most instances I would decline to “see” a nearly- complete aspect pattern where one does not exist, sticking with what is already there and working with that. However, the near-Kite kept drawing my attention. Incomplete aspect patterns can indicate a lot of energy being expended by the individual to complete the pattern themselves. There is a striving towards bridging the gaps that are there and in bringing the pattern into a cohesive whole. The person may sense that there is something as yet incomplete within themselves and seek to resolve this by trying always to excel as completion of the pattern – and perfection – is sought.

The Hubers say of people with a Kite that they “strive for perfection, not necessarily because they want to reach a fixed state though, but to be true to themselves, i.e. in all situations to act in line with their innermost convictions and their heart of hearts”

I would normally have not focussed too much on the rickety and incomplete Kite in Astaire’s chart, but having started researching details of his life and career, I discovered that he was, indeed, constantly striving for perfection, and, perhaps, to complete this incomplete figure, spurred on by stickler Saturn on the Balance Point in the 1st house.

“Sometimes he’ll think of a new line of dialogue or a new angle for the story…they never know what time of night he’ll call up and start ranting enthusiastically about a fresh idea…No loafing on the job on an Astaire picture, and no cutting corners.”

He is reputed to have insisted on numerous rehearsals and retakes in order to conserve costs for the actual shooting of a dance number. With so much preparation, the shooting inevitably went well, but Astaire agonised during the whole process, frequently asking colleagues for acceptance of his work.

Director Vincente Minelli said of him:

“He always thinks he is no good”,

and Astaire said of himself:

No, it wasn’t. A friend who is a trained practitioner and teacher of the Alexander Technique tells me that Astaire’s dancing is held up as an example of the kind of ease of motion that can be achieved by using just what strength and effort are required, but no more.

Astaire’s Age Progression highlights some significant life events too. Using the chart as a life clock, which starts ticking at birth with the moving hand of the clock at the AC and travelling in an anti-clockwise direction, we can pinpoint meaningful events. The conjunction and opposition of the Age Point  with a planet are the most powerful aspects and it is interesting to see how the conjunctions to Sun, Moon, Pluto and Neptune coincide with key events in Astaire’s career. At age 31, with his Age Point just into the 6th house and conjunct his Taurean Sun his tap dancing was recognised as among the best. Robert Benchley, the American humourist and columnist wrote:

“I don’t think I will plunge the nation into war by stating that Fred is the greatest tap dancer in the world.”

At age 36-37, when his Age Point was conjunct Pluto, he was involved in making the films he is best known by, with Ginger Rogers as his partner. He not only performed, but choreographed the dance routines, once again applying his unrelenting perfectionist touch to all he worked with. His partnership with Rogers raised them both up to star status, bringing some light relief and offering a distraction, via the silver screen, from the hard times of the 30’s and the darkening days of impending war.

Actress Katherine Hepburn is reported to have said of the Astaire/Rogers partnership:

“He gives her class and she gives him sex.”

I’m assuming she meant sex appeal here but this quote brings a smile to my face as it was made during the period his Age Point was conjunct Pluto.

When the Age Point reached its conjunction with Neptune, Astaire appropriately became more involved with camera and filming techniques. He introduced innovative ideas for filming dance, and insisted that the camera should be stationary and the dance should be filmed in a single shot, holding the dancers in full view the whole time. He also insisted that all the song and dance routines be integrated into the plotlines of the film; the dance was used to move the plot along. Whilst the Age Point was conjunct Neptune, it was also opposite Saturn, his everlasting task-master on the journey to perfection. At this time he applied it to the actual filming techniques.

Astaire supposedly retired from dancing in 1946 and founded the Fred Astaire Dance Studios in 1947 when he was 48, with his Age Point conjunct Mars on the 9th cusp. However, he did the famous “comeback” that many movie stars of that era seemed to, and went on to make several musicals throughout the 1950’s. He eventually went on to develop his acting career, receiving rave reviews in the 1959 nuclear war drama On the Beach. This coincided with his Age Point opposite Mercury and on the 11th cusp at age 60.

Saturn at its highest level, where it acts as a wise guide and mentor, promoting deep learning, has the last laugh as far as the quest for perfection is concerned. At the age of 75, Astaire won a Golden Globe for Best Supporting Actor, and a BAFTA award, for his performance in The Towering Inferno as his Age Point made its second conjunction with this planet.

Not bad for someone whose screen test report read:

Using Age Progression is available in paperback, with full colour ilustrations, and as an ebook at the  APA Bookshop, Amazon, and other booksellers.