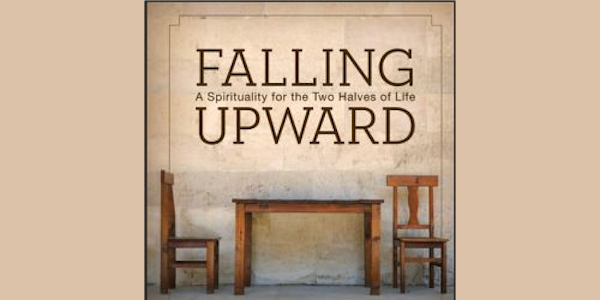 A spirituality for the two halves of life

This little book encapsulates the wisdom of modern psychology and the essence of most religions.

Essentially we spend the first half of life creating the psychological ego and learning to live within the boundaries set by society – the laws, rules, traditions and conventions by which society operates. We seek the approval of others or seek to oppose them – essentially with a dualistic right-wrong viewpoint.

In the second half of life our task is essentially to move beyond and dismantle that ego and discover our true inner essence, operating from position of true authenticity. We are no longer bound by the rules of society but operate from a higher inner self. Our concern is no longer the little self, the ego, but the good of the whole. We exhibit wisdom.

As a member of the catholic church, Richard is at pains to point out the dangers of religion in freezing us into the first part of life rather than encouraging us to step forward to this second. As most religious organisations essentially operate in first half of life terms and have lost the impetus to move beyond to that inner essence, that in many times has had to move underground.

Society itself also encourages us to stay in the first half of life and not develop beyond. This is particularly so in the modern age with all the wonderful technological devices available to us. Is there not evident a lack of wisdom in the leaders around us? Such that we revere the few who do exemplify this, such as Nelson Mandela, Vaclav Havel, the Dalai Lama, Martin Luther King.

The journey from first to second halves is paralleled in the hero’s journey of myth and legend, for example the trials of Odysseus. And failure and coming to terms with that failure, and our own ‘shadow’, are an essential part of the process. Many of the bible stories tell also of this process – how the prodigal son is feted on his return, to the disgust of the one who stayed at home  (in the first half ).

Richard relates all this to the aging process, and suggests that the goal of the aging process is  ‘falling upwards’ into this state of wisdom and the real self that is beyond the little ego. He speaks of the radiant older people that he has met who are true exemplars.

Astrological psychology, as put forward by Bruno & Louise Huber, provides a far richer psychological / astrological / spiritual model of this process, and provides practical means to help the individual through the process. The birth chart essentially provides a map for the process! The ego planets give strong clues on the configuration of the little ego, and the Family Model identifies its major formative influences. The Life Clock even sets a time frame when changes are likely to happen, at a much more detailed level than just ‘first/second half’. And so on…

So do read ‘Falling Upward’ for the inspiration it offers; more important, take the next step on your own journey there.