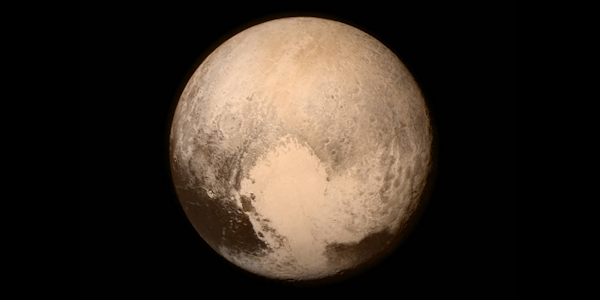 It’s good to see you back in the news after that terrible time in August 2006 when you were demoted from your status as a planet in our solar system by a group of scientists and astronomers who’d got together in Prague to do the deed. You were downgraded to a dwarf planet. That meant you were no longer counted as part of our solar system, now supposedly made up of eight, not nine, planets. The scientists may have been right. They were trying to decide on the definition of what a planet is. They may also have been wrong or may even, as I write these words, be revising their views on you and on what constitutes being classed as a planet. This is because of those spectacular images of you which have been beamed to Earth by the New Horizons space probe, bringing exciting new information.

Pluto, you have taken us all by surprise with your beauty, your mountains and your large heart-shaped region. Scientists are excited, saying that you have a very young surface, with no impact craters in sight. Yet you, Pluto, are thought to be billions of years old. This information brings with it a renewal of how you are regarded. Speculation is ongoing about ice volcanoes and many scientists are excitedly going back to the drawing board to review and revise former theories about you, many of which may no longer be valid.

I quote here from an article written by David W. Brown. Brown says, quoting John Spencer, a lead scientist in the New Horizons project, “The surface of Pluto is covered in nitrogen ice, methane ice, and carbon monoxide ice. “You can’t make mountains out of that stuff,” he said. “It’s just too soft; it doesn’t have the strength to make mountains.” At Pluto’s temperatures, there is one thing that can hold up such a mountain: a bed of water ice. The volatile ices — nitrogen, methane, and such — are just a frosting on the surface.”

What are the scientists talking about here? Volcanoes beneath the surface….huge 11,000ft-high mountains on a par with the Rockies….the manifestation of hidden and unexpected power….the ability to overturn and transform all previously held theories….? Doesn’t that sound just a little like some of the qualities attributed to Pluto in astrological psychology?

Of course, Pluto, I’m biased as you sit on the AC in my chart and oppose my Moon, so I’ve always had a bit of an affinity with you. And Alan Stern, who has devoted much of the past 20 years to the mission to Pluto, is quoted as saying, “I’m a little biased, but I think the solar system saved the best for last.” Yes to that. Pluto, welcome back. The astrologers amongst us never doubted you and have kept you in the charts we set up as you can be a beacon for personal and spiritual growth.

Read the full article at http://theweek.com/articles/566768/scientists-who-conquered-pluto