Will’s and Kate’s second baby was born at 08.34 on May 2nd 2015 in London. Like her great-grandmother, the Queen, she has a Taurean Sun, an Efficiency triangle and a Search figure aspect pattern in her chart. She could grow up to be a very interesting young lady.

Her chart image suggests a grand gesture, almost as though she has entered a room, arms flung wide, wearing a large and dramatic cape which flies out behind her. The balance of red, green and blue aspects in the chart are equally balanced, suggesting she should be able to choose which mode of motivation she steps into (red for actively doing, green for searching and thinking, blue for resting and being). However, it’s likely that it will take some time for her to consciously choose which type of energy to activate, and with a comparatively high ratio of green aspects, she may be overwhelmed at times by indecision. 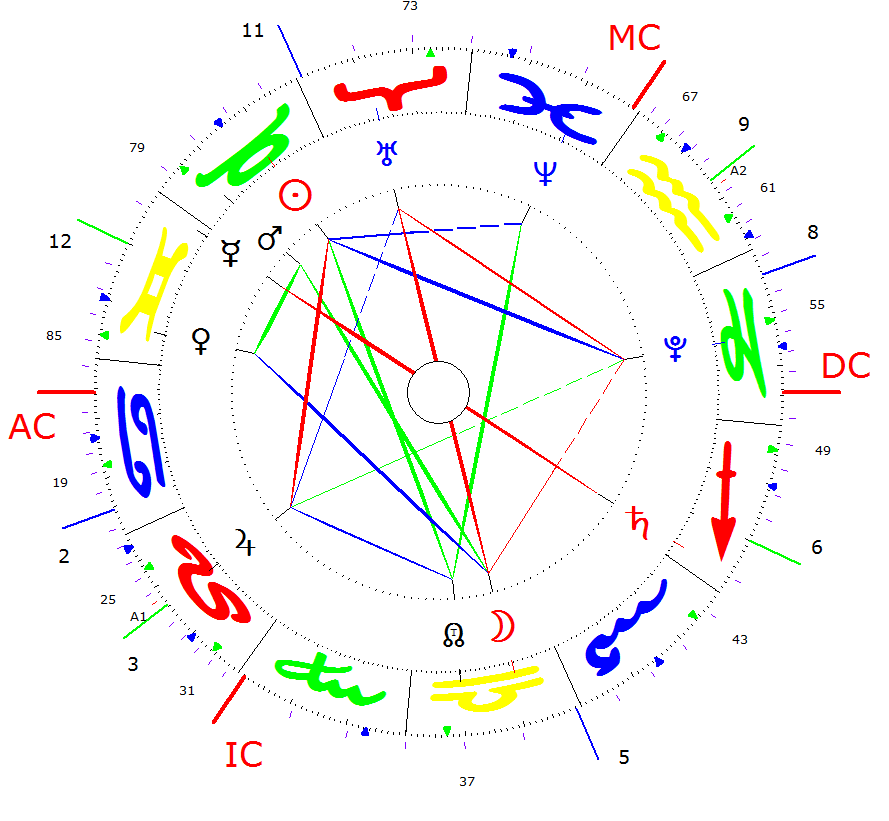 Her Sun, riding high in the chart, is intercepted in Taurus. This could make it more challenging for her to assert herself as she may feel she’s not always heard or recognised as much she would like. Will she feel she’s in the shadow of big brother George? She will be able to draw on the planets the Sun aspects to help express the sense of self that the Sun symbolises in the chart. Jupiter could be a strong ally here, backed up by Neptune and Pluto. The Efficiency triangle has Pluto at the apex, the business end of this aspect pattern, and the planet through which the red active energy and drive of this figure is expressed. Other planets involved are Uranus and the Moon, interestingly including the ongoing Uranus/Pluto square. With her Moon as the one personal planet in this triangle she has been born into a time of global change and may develop an intuitive understanding of the process of change. Perhaps, with a Libran Moon, she may be concerned about fairness and greater equality.

What of the Family Model in the chart? Sun (Wills) rides high and is very strong by sign. For her, he could be a dad to be looked up to and also one who could offer plenty of practical hands-on fun and play. Saturn (Kate) is in a separate, linear aspect and is opposite Mercury. Could she be the one who will guide the young princess to know when and how to speak, to mind her p’s and q’s and offer a shining example of how to get along with others from all walks of life? The baby princess has Moon (the child herself in this Family Model) in the 4th house, suggesting a need for the comfort of home, family and of belonging. Born into a royal family this could be an asset, although the Moon’s aspects to Uranus, Pluto and Mars could rock the boat too, but this will be tempered to some extent by its aspect to Venus.

Congratulations to Wills and Kate – and to big brother George too – on their new arrival. Their family has grown and like all new parents, excitement and joy will surely be high on the agenda.

For more on the Family Model see

and for more on Babies’ charts see

Joyce is Principal Emeritus of the Astrological Psychology Association and is author of a number of books, including ‘The Cosmic Egg Timer‘, the best introduction to astrological psychology, available from the APA bookshop.