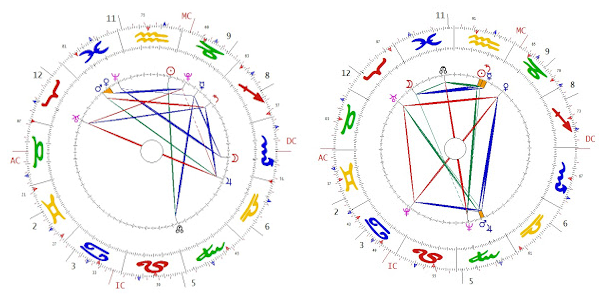 We live in interesting times, as the saying goes. Anyone paying attention to the on-going parade of changing world events in 2016 will be wondering “what next?” What in heaven’s name is coming up in 2017? More change? Less upheaval? More of the same but at another turn of the spiral? Here’s the chart for the start of the year – what do you think?

The chart image reminds me of a pterodactyl dinosaur, which was a flying lizard, wings outstretched – but is it flying away into the distance or swooping down to land? Play around with ideas of what the image may be, and what it might mean for you. The aspect colours are predominantly red/blue with two precious green semi-sextiles to help offset the overall either/or colour motivation. The shaping is triangular, suggesting flexibility and change, not stasis, and the dominating aspect patterns are both Ambivalence figures, reflecting the either/or, on/off nature of the colour motivation in the chart.

I’m not interpreting the chart, just setting the scene. At the start of this new year, and following a tumultuous 2016, I’m focussing on the positions of the slower moving outer planets and how they might impact on our increasingly edgy and changing world.

In 2017, Pluto will remain in Capricorn all year, staying in this sign until 2024, with a few occasional forays into Aquarius. I wrote about Pluto in Capricorn in 2009 – you can read my thoughts on this here as well as watch my video on the same subject. I’m still following the unfolding events of Pluto’s journey through this sign, and I add some of the events of 2016. The uncovering of corruption is ongoing. The Panama Papers, Philip Greene’s disgraceful sale of BHS for £1 and his lack of concern over dumping his staff and making off with their pension fund, the coming to light of sexual abuse by junior team football coaches of young players back in the 1970s, phone hacking, election hacking and police corruption are just a few things that come to mind. You’ll be able to name more – please just add them to the comments at the end of this post. Pluto will continue to root out, expose and shake up establishments, businesses, governments and institutions  – maybe the whole world – for the next 7 years. Pluto at its lowest level of expression manifests as ego-mania, manipulation and the use of power for personal gain. At its highest level it can channel spiritual will and motivation; we have to go through the crap before we can rise above it. Maybe that is one of the tasks for the year ahead….

So that’s Pluto; now on to Neptune, in its natural sign of Pisces throughout 2017. Neptune at its highest level is seeking unity, to express universal love and acceptance of all living creatures, asserting, as British MP Jo Cox said, “We have more in common than that which divides us”. She was murdered by one of her constituents for her outspoken inclusive attitudes a week before the UK referendum in June, shocking the hustings into silence for a short while. But the lower aspects of Neptune swiftly rose again here in the UK with lies, deception and back-stabbing behaviour channelled through politicians as they scrabbled around for power in the referendum vote (oh Pluto, you were definitely there too, adding your two-pennyworth). Globally news was, and probably continues to be, beset with false images, false stories, false claims, illusory realities. Something to be aware of there – “Where is The Truth?” would be a good question to keep in mind in 2017.

Uranus will continue to travel through Aries in 2017, opposing Jupiter in Libra some of the time. This could egg Uranus on to move from its lowest level. Here security is paramount, with technology, defence mechanisms and machines keeping things fixed (Uranus, commonly thought of as being a rebel, is actually a fixed quality planet); at its highest level Uranus moves away from hidebound fixed responses and fires up the explorer in us, the creative spirit, and encourages problem solving. Jupiter expands, poses risks, but it can open up new possibilites. It could be useful. Globally we have plenty of problems to address.

The other slow moving planet is Saturn, currently coming to the end of its journey through Sagittarius. It enters Capricorn in December 2017 joining Pluto, adding weight to the focus on this sign and all it stands for collectively.

If you’re wondering how 2017 echoes with 1933, comparisons have been made in the past year between the mood and events in the 1930s and what is going on now. The rise of the far right’s extremist views echoes the rise of the nazi party in the 30s; the election of Donald Trump, an unpredictable power-hungry businessman and reality tv performer, as US president, due to be inaugurated on 20th January 2017, echoes the swearing in of Hitler as German Chancellor on 30th January 1993.

Here I took a look at the charts for both events, but what caught my attention was the positions of the three outer planets – Uranus, Neptune, Pluto. Two are in signs opposite to those they were in in 1933, one is in the same sign and all are very close to the same degree:

Yes, I know things like this happen in planetary movements….and of course it could just be coincidence.

But doesn’t it suggest it’s time to pause, to think and to be aware because maybe it’s time for us all to wake up and speak up for those things we value.