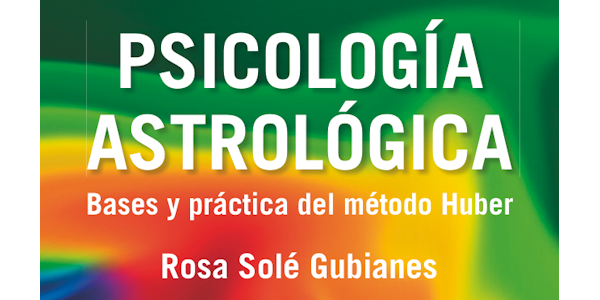 This thorough manual of the practical basics of the Huber method of astrological psychology totals nearly 400 pages. It honours the memory of Bruno Huber, celebrates the 90th birthday of Louise in May 2014, and includes beautiful colour illustrations by Michael Huber and Silvia Sánchez.

The book is divided into three parts and eleven chapters. Part 1, introducing psychological astrology, starts with a chapter on psychology, the natal chart, and synthesis, followed by one covering basic method and another on astrological psychosynthesis, which explains that Assagioli’s egg represents the structure of the psyche while his star demonstrates how the psyche works (p.48), and it looks at the egg side by side with the Bruno Huber’s amphora (p. 54). Chapter 3 rounds off the first part with a useful list of integration techniques:
[list type=circle_list]

[/list]
The second section on the five levels of the natal chart contains one chapter on each level, starting with the astrological houses on the periphery. This middle section in which Rosa comprehensively examines the meanings of houses, signs, planets, aspects, and the central circle is by far the longest. She works from the outside in, beginning her chapter on hemispheres, quadrants and houses with a quotation by Louise Huber:

The house system is structured around the human being and constitutes a sensitive field in relationship to the environment. You could say that a human being always carries his house system with him and that it forms part of his aura and vital space.

Towards the end, she draws together the threads by asking some searching questions. For example, if I have a full eighth house:

What is my responsibility to my surrounding society? Which ethical, moral, legal, religious, and philosophical values are important to me? What are my symbols of personal transformation?

The chapter ends with an exercise on working with the house axes, advising the student to follow this sequence: identify—accept—coordinate—transform—integrate (p. 112).
In her discussion of the signs, Rosa incorporates Bruno’s understanding that esoteric astrology began in ancient Sumer, as well as Alice Bailey’s esoteric rulerships and Louise’s journeys across the axes from a sign operating at the personality level of its exoteric planet to its opposite sign where a critical awakening opens the door to transformation and return to the original sign operating at the level of the soul expressed by the esoteric planetary ruler and its seed thought. Planets are explored in detail, and the chapter ends with an exercise on horizontally integrating the three ego or personality planets as a prelude to vertical individuation, with the guidance: recognize—accept—coordinate—integrate—synthesize (p. 229). By contrast, the chapter on aspect patterns is relatively short, and the student must consult Aspect Pattern Astrology and Aspect Patterns in Colour to complement his or her studies. The middle section ends with an explanation of the circle at the centre and some further reflection on the amphora.

The final part is relatively brief, and the keen student needs to purchase Moon Node Astrology and Transformations to complement Rosa’s introductions to more advanced techniques.

The supplementary annex on the Seven Rays does not use Bruno’s revised system and merely refers readers to the Huber book if they want to know more.

A lot of excellent basic material is packed into this manual, in which the integration of psychosynthesis and esoteric astrology with signs and houses is particularly good. These are areas in which students who take up the Huber system without prior knowledge of astrology are often quite weak in their interpretation, so it provides the necessary grounding for more advanced work. Like our own diploma course, it adheres to Assagioli’s assertion that ‘Psychosynthesis does not aim nor attempt to give a metaphysical nor a theological explanation of the great Mystery—it leads to the door, but stops there’ (Psychosynthesis, pp. 6-7). This can be disappointing for some students, but it is far more honest insofar as it allows the disciple to find his or her own spiritual path without being dependent on a guiding guru with a doctrinal rulebook.

The Spanish school in Barcelona has a flourishing programme of online courses so, if you know some Spanish, check out www.psicologiaastrologica.es and like Escuela Huber on Facebook.